AEK have won their first trophy in almost a decade after beating Atromitos 3-0 in the Greek Cup Final at the Olympic Stadium on Saturday but the gloss was taken off their win due to several pitch invasions and clashes between AEK fans and Atromitos players at the end of the game.

The scoreline slightly flattered the Yellows but they proved much more adept at taking their chances than their lowly rivals. Goals from Nikos Liberopoulos in the first half and Nabil Baha and Pantelis Kafes in the second sealed the win for AEK.

Although the game, and particularly the second half, had plenty of talking points, the attention will once again fall on what was going on in the stands rather than on the pitch.

The signs were not good from the start, when AEK and Atromitos fans threw flares at each other as the national anthem was being played before the game.

Things settled down in the stands and after a slow start on the pitch, AEK began to gain an upper hand over their rivals, who finished 12th in the Super League. The breakthrough for the favorites came in the 29th minute when Nacho Scocco crossed for Liberopoulos to head past Charles Itandje.

Replays showed that the veteran striker was in an offside position when he rose to exquisitely head the ball into the net. The goal prompted a small pitch invasion by exuberant AEK fans

The joy for AEK was tempered by the fact that Scocco limped off moments later to be replaced by Baha.

Baha had a good chance to double the lead in the 38th minute but Itandje saved with his legs. It was the last significant action of the first half.

Atromitos began the second half well and went close with two headers in the first 10 minutes.

AEK responded with a great chance of their own on 57 minutes when veteran central defender Traianos Dellas flicked on a free kick but Itandje produced a remarkable save to tip the ball onto the post.

The decisive moment came 20 minutes later as Atromitos threw more men forward in search of an equalizer, leaving gaps in defense. The second goal had a good deal of fortune about it as Liberopoulos missed a teasing cross but the ball hit the back of substitute Pantelis Kafes’ leg to rebound straight in the path of Baha, who slotted it home.

This prompted more AEK fans to spill onto the running track around the pitch at the Olympic Stadium and the last few minutes were played with hundreds of people standing within meters of the players. 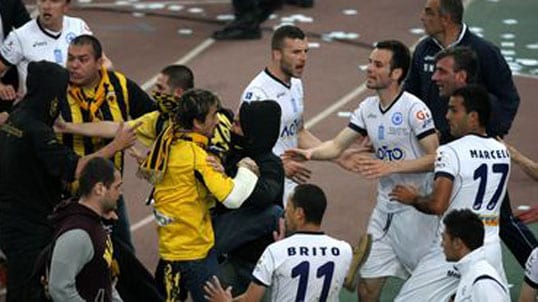 AEK completed their win with an exquisite third goal in the 86th minute when Kafes was released by a through ball from Panayiotis Lagos and the Greek international chipped the ball over the Atromitos goalkeeper to secure his third cup win, each with a different club.

However, the closing stages of the game proved the most controversial as referee Tasos Kakos had signaled he would play eight minutes of injury time but the game seemed to end after just three minutes had been added.

As the players left the field, some of the Atromitos squad clashed with AEK supporters that had run onto the pitch and appeared to be targeting people sitting in the VIP section of the stands. Commentators suggested that the AEK fans were trying to attack representatives of Atromitos and players’ relatives, which officials and players from the Peristeri club later confirmed.

A few minutes after the apparent end of the game, it emerged that Kakos had not blown the final whistle but that he signaled for the players to leave the field because so many fans had gathered around it. But the prospect of the players returning to play the remaining minutes seemed impossible because AEK fans had torn the nets from the goals and the pitch was strewn with advertising hoardings, chairs and other debris.

According to state television NET, Hellenic Football Federation (EPO) officials and representatives of both sides spoke to Kakos and it was decided that the extra minutes would not be played and the cup would be awarded to AEK.

AEK’s win – the club’s first trophy since 2002 – was tarnished by the events at the end of the game and celebrations will undoubtedly be overshadowed by the ensuing argument over who was to blame for the lack of order and by Atromitos’s complaints about the circumstances of their defeat.

Atromitos have slammed the manner of their 3-0 defeat in the Greek Cup final, raging against both referee Tasos Kakos and AEK fans who invaded or encircled the pitch for much of the game.

“This took Greek football back at least 100 years,” said Atromitos owner Giorgos Spanos. “AEK won the cup today because they had to win. Everyone saw what circumstances we had to play in.”

Atromitos were angered that AEK’s opening first half goal stood despite scorer Nikos Liberopoulos being in an offside position before heading the ball. But they were also upset by the behavior of the AEK fans, who invaded the pitch in droves at the end of the game.

Some Atromitos players fought with the pitch invaders who appeared to be targeting people sitting in the Peristeri club’s part of the VIP section.

“This was shameful for Greek football,” said midfielder Andreas Tatos. “There were people on the pitch at the end throwing flares into the stands where our families were sitting.”

Atromitos coach Giorgos Donis gave a damning verdict of the referee’s performance and suggested that the manner of AEK’s win was highly questionable.

“We are experiencing something utterly disgusting,” he said. “My players came in at the end after being attacked and having guns pointed at them.”

Donis also claimed that the game had been fixed to ensure that AEK would win.

“This was all staged. When the outsider goes behind to a goal that was two meters offside, everyone can work out what was going on. AEK has won a phony title.”

Atromitos’s criticism did not temper AEK’s joy at winning the club’s first trophy since 2002.

“It’s really important that the team won a title after so many years,” said veteran central defender Traianos Dellas. “We worked hard for this. We need some calm now so we can look at the club’s future.

“Three-nil is a very clear scoreline,” he said. “We won the game on the field. We can’t be held responsible for what happened off it. We are all aware of the problems that Greek football has.”

“I came to Greece to win titles so this is very important for me,” said the Spaniard. “I want to thank my players because this was a hard season but they managed to turn their fortunes around.

“I want to congratulate Atromitos for remaining in the Super League, getting to the Greek Cup final and playing a good match.”