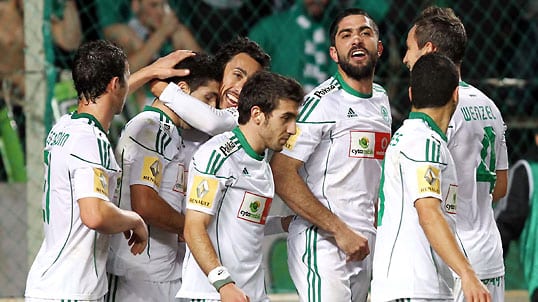 The 2010-2011 football season comes to a close tonight  Wednesday with the Cyprus Coca-Cola Cup final between Apollon Limassol and Omonia at 6.30 pm Cyprus time.
Holders Apollon, who defeated APOEL last season, will not only be aiming to defend their title but will also be aiming to save their season which saw them lose out on fourth place to AEK Larnaca. The Limassol side’s only chance of playing in Europe next season, via the Europa League, will be to defeat league runners-up Omonia who will also be eager to not finish off the year empty handed.
Andreas Michaelides’ Apollon had previously eliminated eventual champions APOEL (1-1. 2-0), Olympiakos Nicosia (1-1, 3-2) and Anorthosis Famagusta (1-1, 2-1) while Omonia had enjoyed an easier route eliminating second division opposition Halkanoras and Aris Limassol before securing the final berth against Ethnikos Achnas courtesy of an extra time winner from Hungarian midfielder Leandro. Having been held to a 1-1 home draw against Anorthosis in the other semifinal, Apollon drew level at the Antonis Papadopoulos Stadium after an early goal from Cafu was equalised 13 minutes from time from Mustapha Bangura. Cyprus’ top scorer Miljan Mrdakovic stunned the hosts in injury time to send his side through to their second successive final. 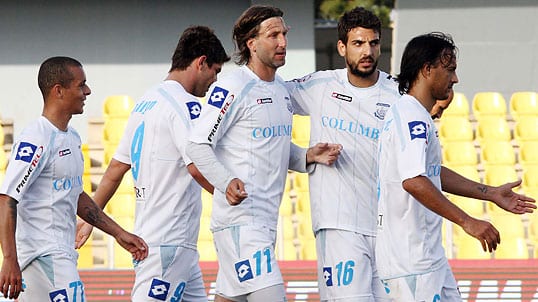 Apollon Players above
”We scored in our favourite minute”, commented Michaelides, referring to Apollon’s goal in the first leg semifinal which was also in added time. “It’s a great feeling to know that you are in the final. We didn’t start that well but we never gave up, took risks and it worked out for us in the end. We have shown just how strong we are in this competition by eliminating both APOEL and Anorthosis.”
Michaelides has only ever once lifted a domestic trophy when he guided Anorthosis to Cup success in the 2001/02 season.
Omonia, who have endured a troubled season which has seen them relinquish their league title to cross-town rivals APOEL and have changed three different coaches in the process, are being currently coached by caretaker manager Neophytos Larkou.
Apollon and Omonia have met three times in the final in the past with Omonia prevailing on two of those occasions. They last met in the 1991-1992 season with Apollon squeezing out a 1-0 victory.
Larkou, who could be in line to take over the vacant Cyprus coach position, added, “We have made it to the final and we will do whatever we can to win the trophy. We would like to thank the fans who were again by our side and were patient. The players have been under a lot of pressure at times this season which is why our performances are not always what we expect.”
But the buildup to Wednesday’s final hasn’t been without its problems. Fans from both clubs have hit out against what they feel is the club’s exploitation on ticket revenues. Apollon have increased their ticket prices to €60 per person whilst Omonia have also increased their prices to €40.
The choice of the final venue also didn’t go well with Omonia fans after Apollon refused to play the final at GSP Stadium in Nicosia – which also the home ground of Omonia. The final, like last season, will be played at the smaller GSZ Stadium in Larnaca.
Meanwhile, Wednesday’s final will be refereed by Swiss match official Massimo Busacca with the Cyprus FA opting for a foreign referee in a bid to avoid accusations of bias after the game.
Busacca, who refereed the 2009 Champions League final between Manchester United and Barcelona, will become the second high-ranking official to take charge of a local game following the appointment of Italy’s Roberto Rosetti last year.
The CFA this week issued an announcement warning fans to be wary of counterfeit tickets saying anyone in possession of such tickets will be arrested.