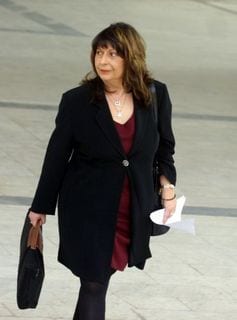 Antonia  was found guilty last year of being part of a trial-fixing ring. In her absence, she was sentenced to almost seven years in prison.

She has been on the run since being charged with working with corrupt lawyers to fix the outcomes of trials but was arrested in Brighton, south of London, last Thursday.

She had been teaching French at a local college and insisted that she was not Antonia Ilia but a French citizen. However, police searched her apartment and found her passport and ID, which confirmed that she was the fugitive judge.

The woman’s claim caused a furor during a local court hearing on the Greek extradition request. When asked to confirm her identity in court, the woman said her name was Antonia Jemen, born in the French town of Amiens in March 1963, and that her parents were Constantin and Claire Jemen.

The prosecution, however, presented evidence in court found in the woman’s Brighton apartment that included a Greek ID card, Greek passport and Greek driver’s licence in the name of Antonia Ilia.

The prosecution further submitted documentation from the British police that the fingerprints of Ilia contained in the Interpol arrest warrant were the same as those of the woman arrested.

The woman claimed in court that the documents found in her apartment had possibly been left behind by college students given that, according to her claims, she rented out her living room and one of the bedrooms to students.

The court decided to remand her until Monday to enable the collection of additional evidence on her identity.

Fugitive former judge Antonia Ilia is due to appear in a London court on Monday today as part of Greece’s attempt to extradite her.