Bin Laden killed – How it happened

More details have emerged of how al-Qaeda leader Osama Bin Laden was found and killed at a fortified compound on the outskirts of Abbottabad in north-west Pakistan.

The compound is a few hundred metres from the Pakistan Military Academy, an elite military training centre, which is being described as Pakistan’s equivalent to Britain’s Sandhurst or the West Point academy in the US.

There were conflicting reports about the compound’s distance from the academy, with Pakistan’s military saying they are as much as 4km (2.4 miles) apart.

In any case the compound lies well within Abbottabad’s military cantonment, and it is likely the area would have had a constant and significant military presence and checkpoints.

Pakistan’s army chief is a regular visitor to the academy, where he attends graduation parades. 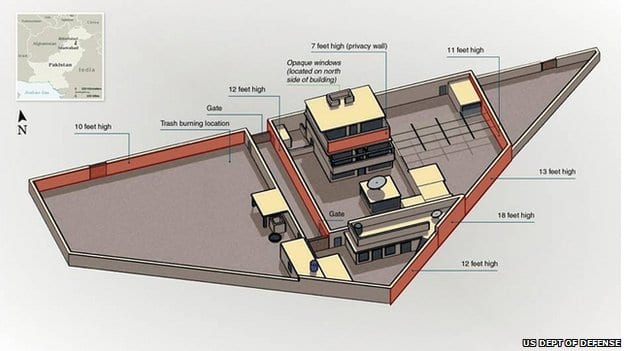 The operation against Osama Bin Laden began at about 2230 (1730 GMT) and lasted about 45 minutes, military sources told BBC Urdu. Two or three helicopters were seen flying low over the area. Witnesses say they caused panic among local residents.

One report of the operation emerged in real-time: Sohaib Athar, an IT consultant living in Abbottabad, posted on Twitter at about 0100 (2100 GMT) that a helicopter was hovering above the city.

He continued tweeting as the operation unfolded before eventually realising: “Uh oh, now I’m the guy who liveblogged the Osama raid without knowing it.”

The target of the operation was the compound, which had at its centre a large three-storey building.

US officials described the security measures as “”extraordinary” – among them high walls and barricades, very few windows, and a 7ft high privacy wall on the second floor.

The compound was about 3,000 sq yds in size but people from the area told the BBC that it was surrounded by 14ft-high walls, so not much could be seen of what was happening inside.

The walls were topped by barbed wire and contained cameras.

US officials described the operation as a “surgical raid” and said three adult males, including Bin Laden’s adult son, were killed. But, they added, a woman who was being used as a shield was also killed.

President Barack Obama’s counter-terrorism adviser, John Brennan, told reporters that the commando team had been “able and prepared” to take Bin Laden alive “if he didn’t present any threat”.

“The concern was that Bin Laden would oppose any type of capture operation. Indeed, he did. It was a firefight. He, therefore, was killed in that firefight, and that’s when the remains were removed,” said Mr Brennan.

The al-Qaeda leader was shot twice in the head.

The entire operation was watched in real time in the White House by Mr Obama and his national security team in what Mr Brennan said was “probably one of the most anxiety-filled periods of time” in the lives of those watching.

“When we finally were informed that those individuals who were able to go in that compound and found an individual that they believed was Bin Laden, there was a tremendous sigh of relief,” he said.

According to local residents speaking to BBC Urdu the forces conducting the operation later emerged from the compound, possibly with somebody who had been inside.

Witnesses said all they could see was fire snaking up from inside the house.

Bin Laden’s body was then flown to Afghanistan before eventually being buried at sea – US officials said this was to avoid his grave becoming a shrine.

Both the Pakistanis and the US have said Pakistan was not warned of the raid in advance. Mr Brennan said it had been “designed to minimise chances of engagement with Pakistani forces”.

One local resident told the BBC Urdu that the house had been built by a Pashtun man about 10 or 12 years ago. The resident said that none of the locals were aware of who was really living there. However, the New York Times said US officials believed that the house was specially built in 2005.

According to one local journalist, the house was known in the area as Waziristani Haveli – or Waziristan Mansion.

The journalist said it was owned by people from Waziristan, the mountainous and inhospitable semi-autonomous tribal area close to the Afghan border, which until now most observers believed to be Bin Laden’s hiding place.

This house was in a residential district of Abbottabad’s suburbs called Bilal Town and known to be home to a number of retired military officers from the area.

Intelligence officials in the US are quoted by AP as saying that the house was custom-built to harbour a major “terrorist” figure.

Local residents say that women and children were also living in the compound.

As details of the raid emerged it became clear that the operation had been long in the planning. US officials said they received intelligence that Osama Bin Laden might be in that compound as long ago as last summer.

CIA experts analysed whether the “high value target” living at the compound could be anyone else but they decided in the end that it was almost certainly Bin Laden.

US intelligence agents focussed in particular on one of Bin Laden’s couriers – a man identified as a protege of captured al-Qaeda commander Khalid Sheikh Mohammed. The courier’s pseudonym was reportedly given to US interrogators by detainees at Guantanamo Bay in Cuba, US media reported.

He appeared to be one of the few couriers completely trusted by Osama Bin Laden, who helped keep the al-Qaeda figurehead in touch with the rest of the world.

For years US intelligence had been unable to name the courier. But four years ago they worked out who he was and two years later they discovered where he operated.

It was only in August 2010 that they located him in Abbottabad, Pakistan.

The order to carry out the mission was finally given by President Obama last Friday, after he had held five National Security Council meetings in March and April.

After the US attack Pakistani troops arrived at the scene and secured the area.