People queueing up for ages to get their meat for Easter Sunday. There was a big queue outside one particular shop in Palmers Green that took over half the parade. 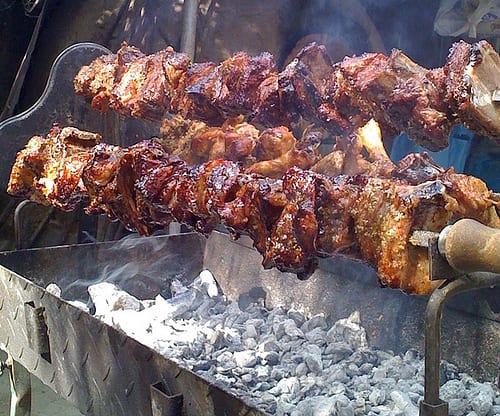 Souvla (Greek: σούβλα) is a popular dish from the island of Cyprus It consists of large pieces of meat cooked on a long skewer over a charcoal barbecue.

It differs from the popular Greek dish souvlaki, in that meat cuts are much larger and slow cooked for a much longer period at a greater distance from the hot charcoal. Traditional souvla is made from the neck and shoulder of lamb or pork. The meat is cut on the bone into chunks about the size of a medium onion.

The meat must be put on so that its weight is evenly distributed, so that it will rotate evenly on the spit.

The meat is put over a high heat at first. After it is sizzling, it is raised away from the charcoal so that it cooks at a slower rate. The process takes between 90 minutes and 3 hours depending on the age of the animal. The younger the animal, the less time it takes to cook.

Salt, aromatics (such as oregano), oil, and wine are sprinkled or brushed on the meat once the cooking process is well under way. That way the meat stays juicy and does not brown too quickly. The cut of meat is from the neck and shoulder, so it needs extra time on the coals to tenderize it.

In many restaurants, especially those outside the middle east, souvla is badly prepared, as there is no way of preparing the dish ‘mis en place’. Thus, Kleftiko is the dish familiar to everyone outside Cyprus—it is easier to make and far more forgiving in the restaurant kitchen—but Souvla is what Cypriots choose to eat on all high days and holidays.

Over time, various localities have developed their own recipes, which tend to vary the spices added to the meat marinade. A popular variant is Lysiotiki souvla, originating from the village of Lysi.

However, souvla in Greece is not a large souvlaki (souvlaki being the diminutive of souvla). When Cypriot-style souvla, or fist sized chunks of meat slowly barbecued on a spit, is found in Greece, it is because those who prepare it have some connection to Cyprus. Typically, souvla in Greece refers to a whole spitroasted lamb and that is for Easter or specialist restaurants; the Greek dish most similar to souvla is kontosouvli, smaller pieces of pork cut from the bone, and kokoretsi(lamb innards/offal rolled into a large sausage), or a speciality of the cook in that region of the country.