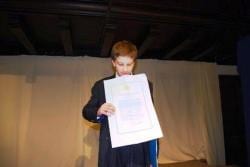 Mr. President, I would like to invite you to our school event, to celebrate Greek Independence day with us”.
This is how twelve year old, Demetris Michailidis, a student of the Hellenic Evangelical Church in Newton, began his letter addressed to the President of the United States, Barrack Obama, inviting him and his family to join the Greek celebration.
In his letter, young Demetri, who speaks fluent Greek, mentions that he will recite a poem in ancient Greek, providing the contact details of the Evangelical Church and Greek School in Newton, so that President Obama would be able to visit the premises, as the “National Herald” reports.

Demetri’s parents, Lazaros and Vasiliki Michaelides, who have three other children attending the school, stated to the “National Herald” that they were surprised by their son’s decision, and even more when they received an envelope from the White House.
The response came personally from the President of the United States, who told Demetri “You have moved and inspired me with your letter and I am glad there are students like you”. The U.S. President included in the letter a manifesto for Greek Independence Day, a photo with his family and a photo of their dog.
Nonetheless, the Greek student already has higher goals and as he stated, he would like to become President of the United States at the age of 35. And when this happens, he promises that he will visit his school and celebrate Greek Independence Day on March 25th.