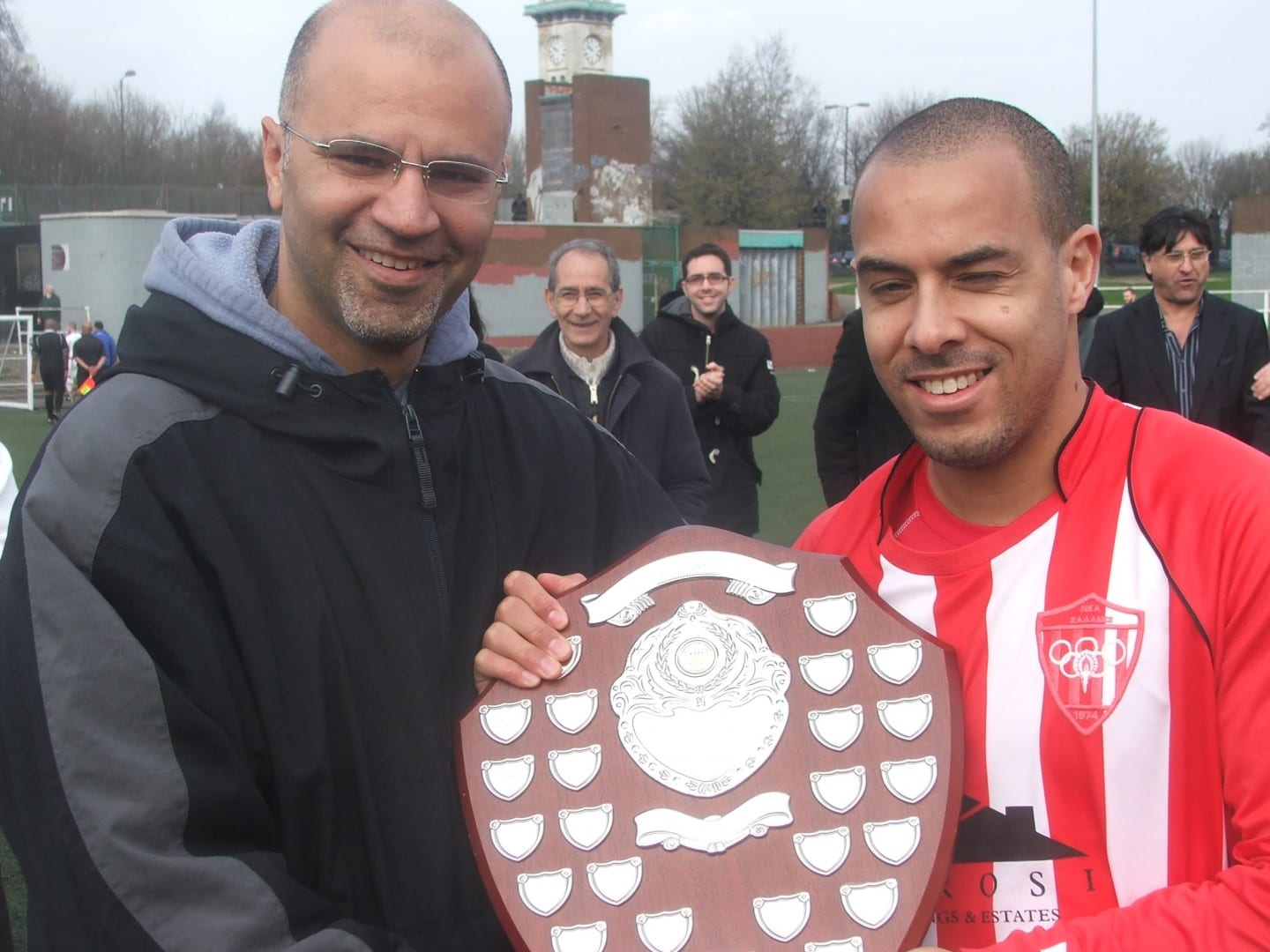 Picture above shows the League Championship Shield being awarded to the Captain of New Salamis Douggie Morton by Chris Yiannakas Senior partner of YVA Solicitors the sponsors of the KOPA Cypriot Football League.

With two games still to go New Salamis are the League Champions , still unbeaten what a great achievement , under the management of George Georgiou they have gone great guns, and it doesn’t stop there, they have the London Football Association Cup still to play for which they are the defending Cup holders and will be playing for that in the final next month.
It was not easy today they played Brotherhood today the only team left that had a mathematical chance of beating them to the title. The Red’s only needed one point from today’s game to win the title. Brotherhood went into the game full steam hoping they could prevent Salamina from winning the title. It took New Salamis 30 minutes to score their first goal which was well taken by Jeff Hammond. Brotherhood had a free kick saved by the opposing keeper and seconds later a scramble nearly led to an equaliser. George Gregoriou scored the second 15 minutes after the break, a fine attacking move by Brotherhood led to Leon Fisher making it 2-1. Justin scored a third for the red’s, then there was a scramble in the New Salamis penalty area which led to Brotherhood’s shot being cleared off the line. Another goal and the fourth for New Salamis from a close range shot from Richard Georgiou ensured victory and the League Championship for New Salamis.
After the game the League Championship Shield was awarded to the Captain of New Salamis Douggie Morton by Chris Yiannakas Senior partner of YVA Solicitors the sponsors of the KOPA Cypriot Football League.
It was then time for the champagne to start flowing and it was free for all for the New Salamis players and supporters.
In the other League game the two bottom teams played, bottom of the table Pendayia played second from bottom Apoel who came out victors winning two nil with their goals coming from Aristos Aristodelous in the first half , both teams each had a player sent off in the first half also. In the second half Alex Rousssis scored a second for Apoel still leaving Pendayia pointless this season.