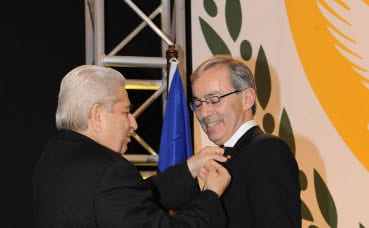 President Christofias honours Nobel Prize Winner
The President of the Republic Demetris Christofias honoured on Monday Nobel prize winner Christoforos Pissarides, presenting him with the Grand Cross of the Order of Makarios III, Cyprus’ highest award.
Speaking at the event, which took place at a local hotel, the President referred to Pissarides’ important work and service to the scientific community which granted him the Nobel prize for the economy last October.
He said that Professor Pissarides is a distinguished scientist and a prominent professor, adding that it is an honour to have him teaching at the University of Cyprus and a member of the Governing Board of the Cyprus University of Technology.
“The Republic’s highest award is today presented to a top flight scientist whose contribution in science has already been acknowledged with the Nobel prize”, President Christofias said.
In his speech, President Christofias also referred to the government’s plan for academic reform, saying that this will give Cyprus the opportunity to successfully meet new challenges ahead, adding that people need to be more open-minded and tolerant to others.
The President of the Republic assured that the government very much supports the foundation of academic and research institutions to help Cyprus face current challenges, find solutions to everyday problems and be a reliable and equal member of the EU.
He also said that if Cyprus had founded academic institutions soon after independence, in 1960, the country’s course through history could have been different than the one which led to the coup by Greek junta, the 1974 Turkish invasion and Turkey`s occupation.