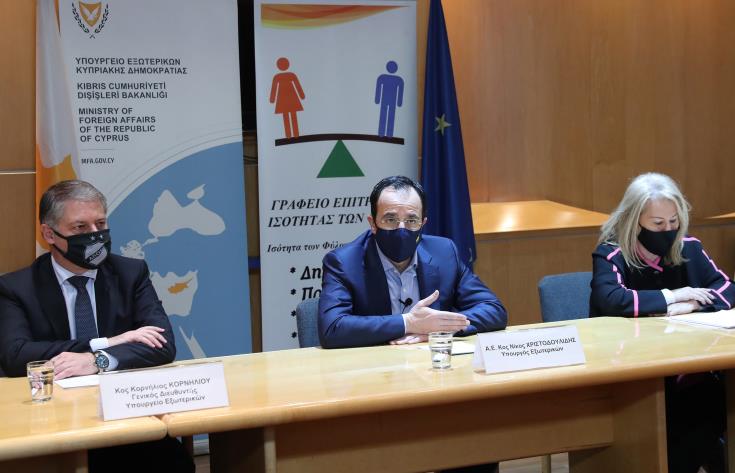 The Republic of Cyprus proceeds with the implementation of its National Action Plan for women, which aims to highlight the role of women in the prevention and resolution of conflicts and the consolidation of peace.

The National Action Plan was presented on Thursday in the Ministry of Foreign Affairs by Minister Nikos Christodoulides and Commissioner for Gender Equality, Iosifina Antoniou.

In his address, Minister Christodoulides said that the adoption of the National Action Plan for women, peace and security, has recently been approved and its aim is the implementation of the UNSC resolution 1325 on Women, Peace and Security.

Christodoulides said that the Ministry of Foreign Affairs has integrated the gender dimension in its foreign policy priorities in order to strengthen women`s rights and promote gender equality and added that the Ministry, through several actions, aims to build and strengthen cooperation. with other countries at regional and European level.

The Minister referred to the contribution of Cyprus in forming policies related to gender equality at EU and UN level, as well as to the participation in international fora, conferences and high-level discussions, demonstrating in practice at international level, the commitment of Cyprus to the promotion of equality.

Christodoulides also spoke about the efforts to strengthen bilateral cooperation to promote equality and added that one example is the future cooperation with the respective Ministry of Norway in September 2021, which aims at the exchange of actions and practices in relation to the implementation of Resolution 1325. A second example, he added, is that the Ministry of Foreign Affairs is in talks with the respective Ministry in Spain to organise actions to promote the rights of women and girls.

The Minister stressed that in this context, the implementation of the Resolution “Women, Peace and Security”, with the adoption of a National Action Plan, is, among other things, an integral part and an important tool of the foreign policy of the Republic of Cyprus.

In her speech Commissioner for Gender Equality, Iosifina Antoniou, said that armed conflicts and violent conflicts cause enormous pain around the world, but have different consequences on men and boys and different on women and girls.

The Commissioner noted that the effective participation of women in peace processes is a dynamic process adding that studies have shown that when women participate in peace processes, agreements concluded are 35% stronger and are likely to last. over 15 years.

Antoniou stressed the significance of Resolution 1325 for Cyprus, which is occupied since 1974 by Turkish military forces and said that women in Cyprus experienced violence and rape during the Turkish invasion. She pointed out that recognising that Resolution 1325 and its directives strengthen the full and active participation of women at all levels of decision-making and the role that women can play in maintaining peace, the Cypriot state has drawn up its first National Action Plan .

The National Action Plan is a five-year plan that covers the period 2021-2025. Actions include promoting more women to senior, leading positions with duties to promote peace and security at the Ministry of Foreign Affairs and in international organisations, The Ministry of Foreign Affairs and other Ministries will work together in cooperation with the Commissioner`s Office to implement the plan.

A committee will be set up to monitor and evaluate the project, and will have a guiding and advisory role. It will meet every six months.