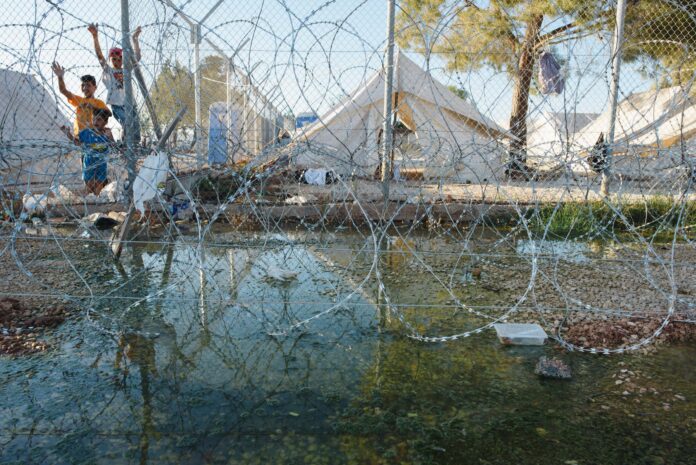 NICOSIA, Jan. 12 (Xinhua) — About 600 migrants hosted at a reception center near Cypriot capital Nicosia clashed overnight, and 24 of them were taken to hospital with wounds and lacerations, police said on Tuesday.
A police statement said the clash took place close to midnight, but it did not say what caused the fighting.
The statement said that an internal barrier was bridged and migrants from different nationalities clashed between them, using stones and iron bars.
The migrants hosting center is bursting at the seams as new people arrive in the eastern Mediterranean island almost on a daily basis.
The center has a capacity of 1,000 people, but it currently hosts about 1,500 migrants.
Meanwhile, 21 people arrived aboard a small boat on the northwestern coast of Cyprus. The police said that the undocumented migrants were all young men. It was the first boatload this year of undocumented migrants.
Their vessel was intercepted and towed by a police patrol boat at a fishing shelter in the early hours of Tuesday.
Police said two of them were arrested on suspicion of being the traffickers, while the rest will be transferred to a reception facility.
the incidents at the Pournara Temporary Reception Centre for Asylum Seekers and the Interior Minister’s statements yesterday

On the occasion of the incidents that took place at the Pournara Temporary Reception Centre for Asylum Seekers and the relevant statements of the competent Interior Minister, AKEL would like to repeat the following:
1) It is generally acknowledged that at Pournara, in an area where the infrastructures and services are structured to accommodate 900 people, today they accommodate over 1,500 people and this number is increasing with the daily arrivals. This was confirmed in statements made by the Minister himself. So there is overcrowding that makes the grounds suffocating full. In addition, because of the health measures, they have been locked down for months now, while a further deterioration in the registration and examination of applications is being observed, a fact which generates additional insecurity and anxiety to the refugees being hosted.
2) We were very surprised to hear the Minister state that “the hosting conditions are very good” and that the incidents taking place are due to culture. Really, how can infrastructures providing for 900 people serve more than 1,500 people satisfactorily and the blame being put on the culture of the refugees for the incidents? Unfortunately, once again, the Interior Minister has revealed the government’s reluctance to change its approach on the handling of the refugee issue, citing ghettoization and the installation of railings as measures to deal with such situations.
The Minister should reply to the accusations made by NGO’s, the United Nations High Commissioner for Refugees (UNCHR) and other bodies about the inhumane conditions and whether there are enough toilets, hot water and blankets for everyone and whether there is enough food and drinking water for everyone? Furthermore, whether tents been set up outside the area which turns into a mud pool with the first rains?
3) The Interior Minister must at long last give an answer as to how the Government and its Ministry are handling the funds from the European Asylum, Immigration and Integration Fund and whether their utilization has a direct impact on the living conditions of the people for whom they are granted.