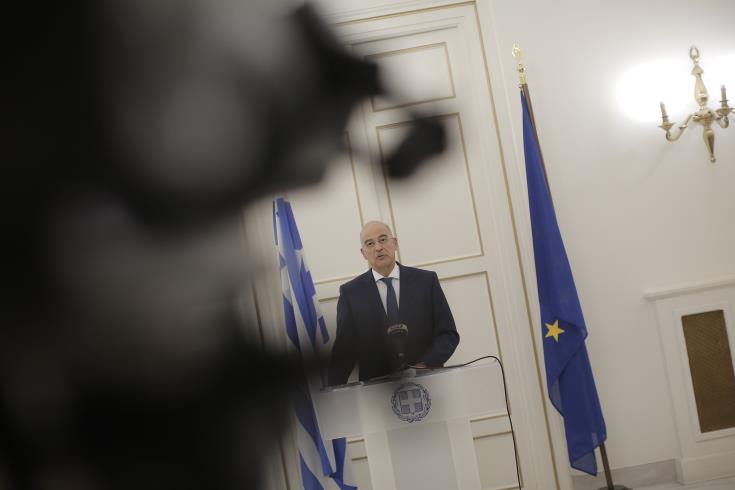 Through its actions, Turkey is turning into a destabilizing factor for the region and undermines NATO cohesion at a crucial time, Greek Foreign Minister Nikos Dendias told NATO Secretary General Jens Stoltenberg. The two men spoke on Thursday on the phone, ahead of a meeting of the Alliance’s Foreign Ministers, early next month, and according to Greek diplomatic sources, Dendias briefed his interlocutor on Turkish provocative and unlawful behaviour in the Eastern Mediterranean and the region.

Turkish actions run contrary to NATO’s founding principles, inter alia the rule of law and respect for human rights, Dendias said. According to the same sources, Stoltenberg spoke about a report of a group of experts, drafted in the framework of the “NATO 2030” reflection process.

Sources pointed to a reference in that report, saying that respect for the organisation’s founding principles by all member states and avoiding using the Alliance for own political gains is deemed to be paramount for NATO’s unity and cohesion. A Turkish officer is a member of this group of experts, the same sources said.

Athens also notes that Turkey has been using its veto right to “punish” countries with which it has bilateral disputes, and is thus constantly causing problems in the proper functioning of the organization.

Speaking after a briefing of parliamentary party representatives, on Thursday in Athens, Dendias said moreover that Greece remains committed to the idea of holding a constructive dialogue, on the basis of international law and the Law of the Sea. For this dialogue to take place, however, Turkey will have to prove its respect for international law and do so in the long run and not “opportunistically” ahead of the forthcoming European Council meeting, he added.

During the briefing, Dendias informed Greek political parties about two documents signed by the Greek Premier, Kyriakos Mitsotakis, with the United Arab Emirates (UAE), during a recent visit to Abu Dhabi. These are a bilateral agreement on Joint Foreign Policy and Defence Cooperation and the Joint Declaration on the development of a Strategic Partnership between the Hellenic Republic and the UAE.

The bilateral agreement is founded on international law and is not directed against anyone, Dendias noted, adding that the aim is to preserve peace and stability in the region. The agreement contains an “innovative” mutual defence clause, the Greek Foreign Minister added and spoke of a “major diplomatic success.”

This agreement also enhances the framework for further deepening Athens’ relations with other countries in the region, such as Saudi Arabia, Israel, Egypt and Jordan, Dendias concluded.