EUREKA; Jason and the Argonauts 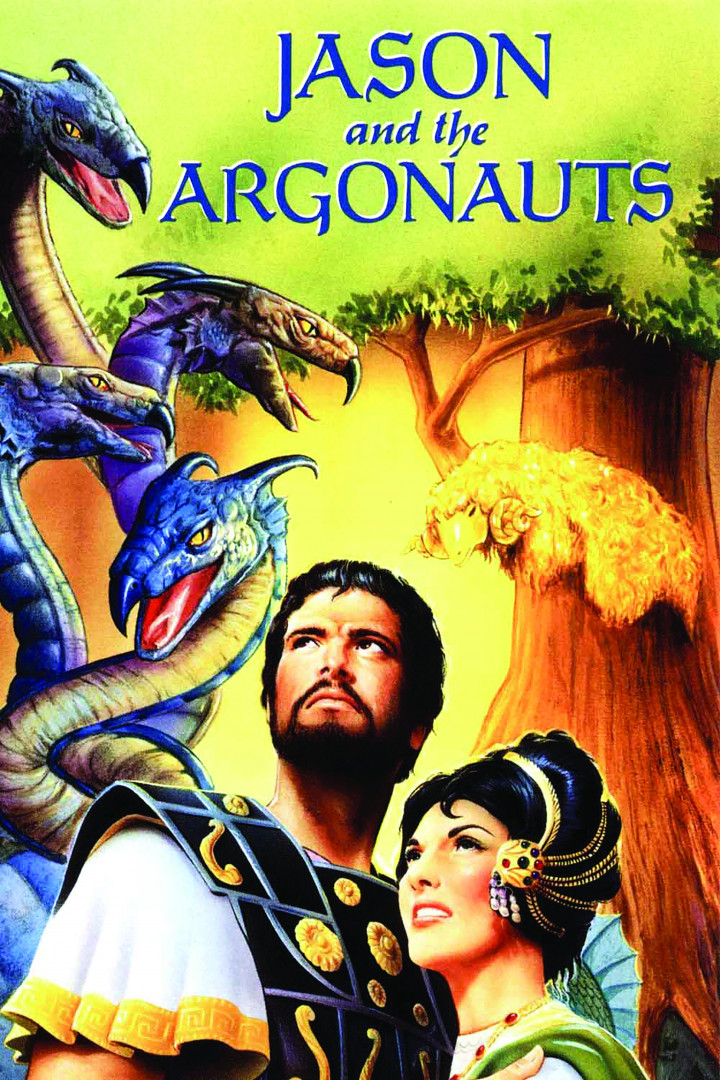 The Pan-Hellenic mythological hero Jason was famed for his expedition with the Argonauts. As the sailors on their ship the Argo were known – in search of the Golden Fleece in Kolchis on the Black Sea, one of the most popular and enduring legends of Greek mythology. The myth may reflect historical expeditions made by the Mycenaeans in the 13th century BC as they explored lands to the east of the Greek world.

Jason’s Youth
Jason was believed to have been educated by the wise centaur Cheiron in the forests of Mount Pelion. He had been placed under the centaur’s care by his father Aison whose younger brother Pelias had usurped the throne of Iolkos in Thessaly. When he reached manhood, Jason participated in the celebrated hunt for the Kalydonian Boar, which involved many Greek heroes such as Theseus, the Dioskouroi, Atalanta, and Meleager. This huge creature terrorized the city of Kalydon and the surrounding area in Aetolia, having been sent by the goddess Artemis in order to punish Oineus, Meleager’s father, for his impiety in not sacrificing to the goddess.
At the age of 20, Jason finally returned to Iolkos to claim his kingdom. On his return journey Jason somehow lost one of his sandals and when he re-entered the city, Pelias saw him and recalled an oracle some years before which had declared that Pelias would lose his life at the hands of a one-sandaled man. Identifying Jason as the oracle’s man, he decided to send the hero on an impossibly difficult and probably fatal expedition to bring the fabled Golden Fleece to Iolkos.

The Golden Fleece
The Golden Fleece came from a winged ram originally belonging to the god Hermes. The ram was sent by the goddess Nephele to rescue her children Phrixos and Helle from being sacrificed after Ino, their jealous stepmother, turned the people of Thebes against them. Saved just in time, the ram flew off over the sea with Phrixos and Helle. Unfortunately, during the flight, the latter fell off the ram into the sea and the place she landed – the modern straits of the Dardanelles – was thereafter called the Hellespont. Phrixos, however, was safely taken to Kolchis on the Black Sea and in thanks to the gods, he promptly sacrificed the ram and placed its golden fleece in the sacred grove of the god Ares where a fearsome serpent was set to guard it.

The Argo
Jason was a favourite with the goddess Athena and it was she who gave the first help to the expedition by having the great craftsman Argo build a strong fast boat to take the hero across the seas to Kolchis. The ship, reportedly the first Greek long ship, was named after its maker and even contained a plank of sacred wood with the power of speech, taken from the sanctuary of Zeus at Dodona. The Argo could carry 50 oarsmen and Jason filled the boat with an all-star crew of Greek heroes. Among the more famous were Hercules from Boeotia, the Dioskouroi twins from Sparta, Meleager from Kalydon, Peleus from Thessaly, Amphiaraos from Argos, Kalais and Zetes the sons of Boreas (the North Wind), and Orpheus from Thrace.
On their voyage to Kolchis the Argonauts had many adventures. One of the more notable was the rescue of Phineus from the Harpies at Salmydessos in Thrace. These terrible winged creatures had been sent by Zeus to torment the blind Phineus as punishment for blinding his own sons on the advice of their scheming stepmother. Zetes and Kalais, themselves winged, chased away or killed the Harpies thus earning the gratitude of Phineus who gave them favourable winds and advice on the best route to Kolchis.

Kolchis & King Aietes
On finally reaching Kolchis, Aietes the king, perhaps understandably, would not hand over the fleece to Jason without a struggle. Instead, he promised Jason the fleece only if he performed some particularly difficult and dangerous tasks. These were to plough a field using two fire-breathing bulls and to sow the teeth of a serpent in the field, and then fight the giants, which sprang up from the magical teeth. Fortunately, Jason was assisted by Medea, the daughter of Aietes. Once again, Athena had intervened and sent Eros to make Medea fall in love with the hero. Medea was knowledgeable in magic, and she gave Jason a magic lotion to protect him from the fire-breathing bulls and advised him to throw a stone amongst the giants so that they would fight each other.
Despite successfully completing the tasks, Aietes still refused to give Jason the fleece and even attempted to burn the Argo. However, Medea showed Jason the location of the sacred grove and gave him another potion to drug the serpent that guarded the Golden Fleece. Taking the fleece back to the Argo, Jason was pursued by the king’s soldiers but Medea delayed them (even killing her brother Apsyrtus in the process) and she fled Kolchis with the heroes.

The Voyage Home
The voyage back home to Iolkos was as protracted as the voyage out and the heroes once more had many adventures. A notable episode is the encounter with Talos, the bronze man given to King Minos by Hephaistos, and who ran around the island of Crete three times each day keeping guard. Talos tried to prevent the Argonauts from landing and so incurred the wrath of Medea who brought his downfall with one of her magic potions.
On the heroes’ triumphant return to Iolkos, despite being given the Golden Fleece, Pelias refused to give up his throne, and it was discovered that Pelias had even conspired to kill Jason’s father, Aison, whilst the hero had been away. Medea then made another magic potion, this time to convince the daughters of Pelias that if they cut up their father and boiled him in the potion, he would gain everlasting youth. This they did and, of course, it was the end of Pelias, but Jason did not become king, instead, he established Pelias’ son Akastos as ruler. Jason, after marrying Medea, left to settle in Corinth, which had been inherited by Aietes from his, father Helios. The couple had three sons and lived happily for ten years until Jason became captivated by the charms of Glauke, daughter of Kreon, the king of Corinth. In jealous revenge, Medea killed both Glauke (with a poisoned robe and crown) and her own children and fled to Athens, in some accounts in a flying chariot pulled by dragons. This tragic end to the myth is the subject of Euripides tragedy Medea.

Links With Reality
The myth of Jason and the Golden Fleece may have been an explanation of early Greek expeditions into the East around the 13th century BC, when the Mycenaean civilization was at its peak. The tale also has similarities to a Hittite myth involving a fleece and the god Telipinu. A third connection with the East is the historical evidence suggesting that the area of Kolchis near the Caucasus Mountains was one rich in gold, often panned from rivers using sheepskins.

Verification of Myth
Recent discoveries by geologists from Georgia suggest that the myth of Jason and Argonauts was based on an actual event. The geologists researched geological data, archaeological artifacts, myths, and historical sources surrounding the ancient Georgian kingdom of Colchis and found that the myth of Jason and the Argonauts was based on an actual voyage that took place 3,300 to 3,500 years ago to obtain the secrets of the ancient gold extraction technique used in Colchis using sheepskin. It seems that Colchis was rich with gold, which the natives mined with special wooden vessels and sheepskins. A sheepskin embedded with golden gravel and dust would be the logical source of the mythical “Golden Fleece.”

The Myth in Greek Art
The myths involving Jason were popular subjects in ancient Greek art. A scene on a Corinthian alabastron demonstrates the antiquity of the subject as early as the 7th century BC. The earliest depiction of the Argo comes from a fragmentary metope from the Treasury of the Sicyonians at Delphi, c. 570 BC. The presence of various scenes from the myths on Attic, Laconian, Corinthian, Chalcidian, and Southern Italian pottery throughout the 5th and 6th centuries BC and the re-telling of the tale in the Argonautica by Apollonius of Rhodes in the 3rd century BC are evidence of the far-reaching and long-lasting appeal of this truly Pan-Hellenic hero.

Film
Jason and the Argonauts is a 1963 Anglo-American independently fantasy film produced by Charles H. Schneer and directed by Don Chaffey. Based on Greek mythology, the film stars Todd Armstrong as the eponymous hero, along with Honor Blackman and Patrick Troughton. The film was made in collaboration with stop-motion animation master Ray Harryhausen and is known for its various legendary creatures, notably the iconic fight scene featuring seven skeleton warriors.

Reception
The film received critical acclaim and is now considered a cult film classic. In April 2004, Empire magazine ranked Talos as the second-best film monster of all time, after King Kong.
At the 1992 Academy Awards, in honouring Ray Harryhausen with a lifetime-achievement award, actor Tom Hanks remarked: “Some people say Casablanca or Citizen Kane. I say Jason and the Argonauts is the greatest film ever made”.
In 2008, the American Film Institute nominated the film for its Top 10 Fantasy Films list.

Talos
While Europa was on the island of Crete the island was watched by a wonderful being made by Hephaestus (the Greek god of blacksmiths, metalworking, carpenters, craftsmen, artisans, sculptors, metallurgy, fire and volcanos).
Talos was a giant automaton made of bronze, but he had life-blood running in a vein from heel to neck. When any one attempted to land on the island, Talos became heated like red-hot iron, clasped the victim in his arms, and held him until he died; Talos meanwhile laughing in fiendish glee. This creature opposed the landing of the Argonauts, but Poeas, the father of Philoctetes, pierced the vein of Talos with an arrow from the bow of Heracles.

Hydra
Hydra also called the Lernean Hydra, in Greek legend, the offspring of Typhon and Echidna, (a gigantic water-snake-like monster with nine heads, one of which was immortal). The monster’s haunt was the marshes of Lerna, near Argos, from which he periodically emerged to harry the people and livestock of Lerna. Anyone who attempted to behead the Hydra found that as soon as one head was cut off, two more heads would emerge from the fresh wound.
The climax of the film is the battle with the children of the Hydra’s teeth. When Acetes catches up with Jason he scatters the teeth while calling on the forces of darkness to avenge him of the crime. From out of the ground appear armed skeletons.
When all the skeletons have manifested themselves to Jason and his men, they are commanded by Acetes to “Kill, kill, kill them all”, and we hear an unearthly scream.