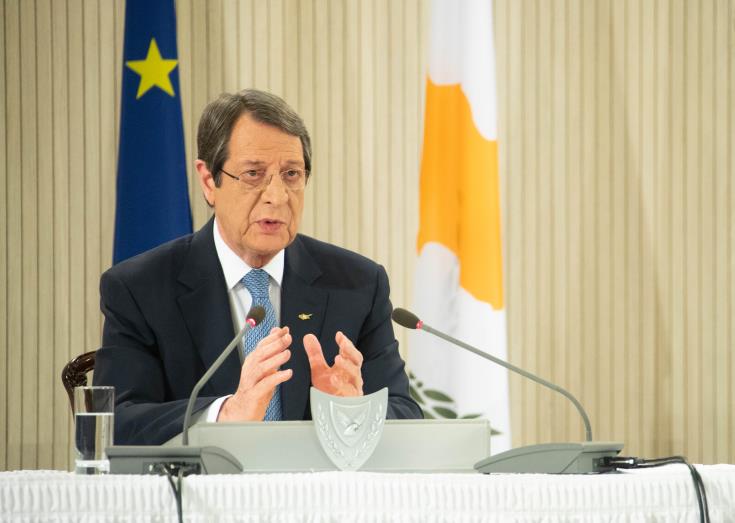 The President of Cyprus Nicos Anastasiades announced on Wednesday that measures to curb the spread of coronavirus on the island are being extended until April 30, in line with the decisions adopted earlier today by the Cabinet. Speaking about the effectiveness of ongoing efforts, the President referred to “a ray of light”, he said however that there was no room to relax measures.

The President was addressing a press conference, at the Presidential Palace, in the presence of the Ministers of Health, Foreign Affairs, Finance and Labor. He also referred to a series of Cabinet decisions regarding the repatriation of students and workers, measures to support employers and employees, and to increase sample tests.

In his address, President Anastasiades noted that he didn’t want to appear unjustifiedly optimistic, but said that measures taken start to bear fruit “and there appears to be a ray of light.”

At the same time, he made clear that no deviation or relaxation of the measures is possible, since any action to the contrary would have “catastrophic consequences” as he put it.

In particular, President Anastasiades said that the Cabinet decided during on Wednesday to extend the measures until April 30, without making any exception for Orthodox Easter celebrations.

As for the repatriation of people, he said that they decided to bring back gradually Cypriots who stay at University dormitories and are enrolled in Foundation Courses or are at their first year of studies.

Persons deemed to assist efforts to fight the COVID-19 pandemic will be also permitted to enter the Republic of Cyprus, regardless of their nationality.

Moreover, the President said that they decided to go on with sample tests in each District, on the basis of the recommendations made by the scientific team. In the coming days there will be 20,000 additional sample tests on people who continue to work in the private or public sector and in the National Guard, he added. The President also said that all people gradually returning to the Republic of Cyprus will be also tested.

Speaking about the measures taken so far, the President said that they aimed to diminish incoming cases from abroad, and called the decision to prevent students studying abroad from returning home as painful. The aim was to protect the students, as well as the rest of the citizens, he added.

Referring to the plan for the safe and gradual repatriation of those who wish to come back home – to be coordinated by the Ministry of Foreign Affairs – the President said that both the numbers and the time schedules are determined in detail, along with strict measures to prevent the spread of new COVID-19 cases.

He also said that additional measures to safeguard jobs and incomes, as well as vulnerable groups imply that the government is determined to maintain the impetus until conditions allow for the restart of the economy.

President Anastasiades also noted that it is not the way of life, but life itself which is in danger and called people not to succumb to difficulties. The duration of measures is dependent on their strict application, he said and acknowledged the additional difficulty due to approaching Easter celebrations.

This is not the first time that we are going through similar or worse difficulties, the President said, adding that the reason we managed to survive is because our determination and tenacity were being put to test. He noted finally that the vast majority of citizens abide by the measures and called on people to continue staying at their homes.