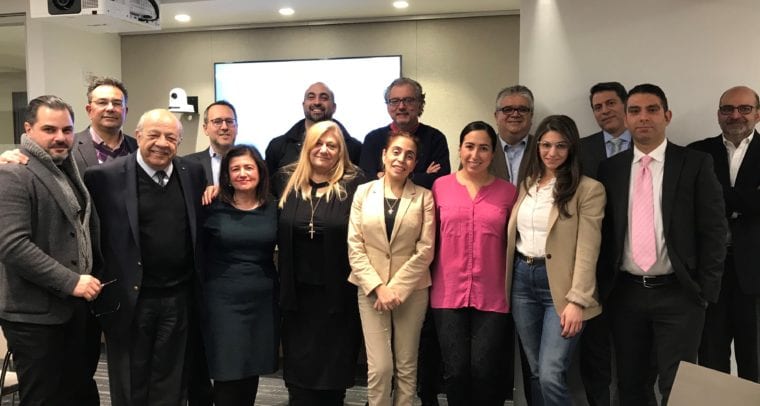 Outgoing President Nicolas Nicolaou thanked the membership for their support and unwavering commitment to the Chamber. Nicolaou, in a sincere expression of appreciation said, “I have been very privileged to have worked with such a distinguished and committed group of Board of Directors for the past four years as President of the Cyprus-U.S. Chamber of Commerce.”

He thanked the Chairman of the Board, Nicholas Karacostas for his invaluable assistance these past four years. In addition, he thanked the Chamber’s Executive Director Despina Axiotakis for her unwavering support and being the “glue” of the Chamber all these years!

Nicolaou thanked Andy Comodromos, Chamber Founder who has contributed to the Cyprus-U.S. Chamber, since its inception in 1997, and “who has been a source of strength and valuable advice to me, during my tenure serving as president.”

Treasurer, Petroula Lambrou reported that the financial condition of the Chamber is in an excellent state and has been significantly elevated these past four years with the direction of Nicolas Nicolaou.

The Trade Commissioner of Cyprus the Honorable Aristos Constantine addressed the membership and expressed his admiration for the Chamber’s work and offered his continued support for the Chamber.

The Board then voted to elect its new Executive Committee for a two year term, and its new members are as follows:

Nicolas Nicolaou, Chairman of the Board

The newly elected President, Maria Pappas, commented, “It is an honor and a privilege for me to serve as the 7th President and first woman of the Cyprus-U.S. Chamber of Commerce. I would like to thank our outgoing President, Nicolas Nicolaou, for his relentless commitment he demonstrated during his presidency. The Chamber is now a highly visible and recognized organization because of his hard work and also for working so hard to create and build a very strong Young Professionals within the Chamber. Pappas identified her goals for the next two years to promote business, social and cultural programs that preserve and promote the trade, heritage and culture of Cyprus and Greece. Pappas thanked everyone on the board and especially Nicolas Nicolaou and Despina Axiotakis for all their hard work.”

The Cyprus-U.S. Chamber of Commerce was inaugurated in 1998 by H.E. Glafcos Clerides (then President of the Republic of Cyprus) to promote and extend commercial, industrial, and economic relations between the Republic of Cyprus and the United States, and works to build strong partnerships between Cypriot and American professionals. The Chamber’s membership comprises hundreds of distinguished entrepreneurs, executives, and professionals in numerous fields including finance, law, communications, energy, engineering, and architecture.