We have serious issues to discuss with Turkey, new Commission President says 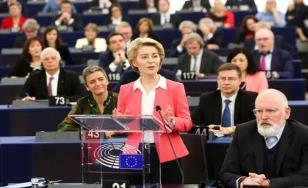 We have serious issues to discuss with Turkey,” the new President of the European Commission Ursula Von Der Leyen stated on Wednesday during her first press conference in Brussels in her new capacity, after the first College of Commissioners meeting.

The President of the Commission stressed that “in relation to Turkey we have very serious issues to discuss”. She specified that these issues require honest discussions and explained that they concern two aspects: “on the one hand respect for international law, the sovereignty and integrity of its neighbors” and on the other, “the EU-Turkey agreement on migration”.

She noted in particular that on the second issue Vice-President Schinas and Commissioner Johansson would go to Ankara for discussions on Friday. The President concluded by saying that she was aware that “there are also other issues ahead of us.”EEAS: The EU has today formally requested notification of the Turkey-Libya ‘Memorandum of Understanding’