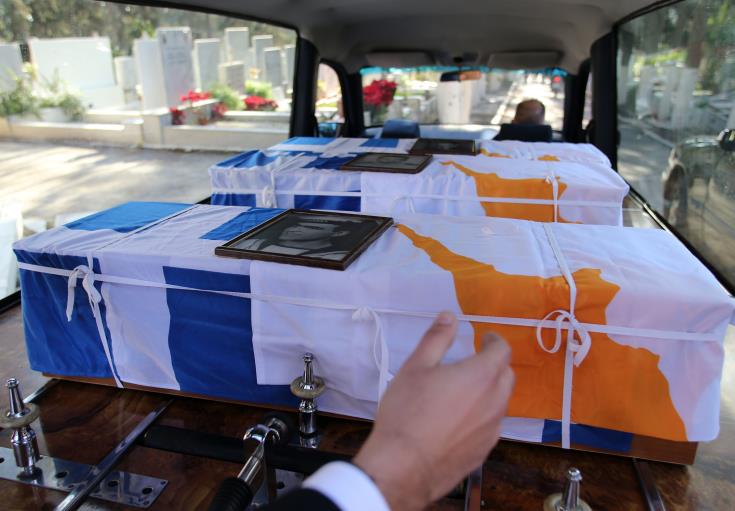 The remains of six soldiers from Greece who were killed during the Turkish invasion of Cyprus in 1974 will be returned home on Thursday. They will be delivered following an official handover ceremony that will take place at the Church of Divine Wisdom in Strovolos, Cyprus on Thursday morning, in the presence of their family and officials from the Greek and Cypriot governments.

The bodies are of four soldiers listed as fallen in action and two formerly missing in action, whose bones were discovered, identified and are now being handed over so that they will be buried with due honours. Two were on the Noratlas plane that was shot down by friendly fire in July 1974.

Warrant officer Constantinos Kourlios, posthumously promoted to colonel, had been buried in a military cemetery in Lakatamia along with private Vasilios Panayiotou. The latter was later promoted to warrant officer.

The other two, warrant officers Constantinos Kateros and Constantinos Elia, had been part of a commando unit airlifted to Cyprus in July 1974 to reinforce the National Guard. They were killed after their plane was shot down by friendly fire over the Nicosia airport.

“It is certainly a moving moment. We express our admiration for the relatives for the patience and strength they showed all these years and hope to ease their pain with this act,” Presidential Commissioner Photis Photiou told the Cyprus News Agency.

The Greek government will be represented at the ceremony by Deputy National Defence Minister Alkiviadis Stefanis, with the Hellenic Army General Staff chief Lieutenant General Georgios Kambas also attending. Archbishop of Cyprus Chrysostomos II is expected to officiate the ceremony.  The Cypriot government will be represented by Defence Minister Savvas Angelides and Presidential Commissioner Photis Photiou.

Family members of the six soldiers arrived in Cyprus on Wednesday to be briefed by the authorities and attend the ceremony on Thursday. The bones of their beloved ones will be delivered to the church by the Cyprus National Guard on Thursday morning. They will then be taken to Larnaka airport, where a blessing service will take place, and carried to Greece in a Hellenic Air Force C-130 transport plane.

A second ceremony will follow in Greece, attended by Greek National Defence Minister Nikos Panagiotopoulos and representatives of the Cyprus embassy in Athens.