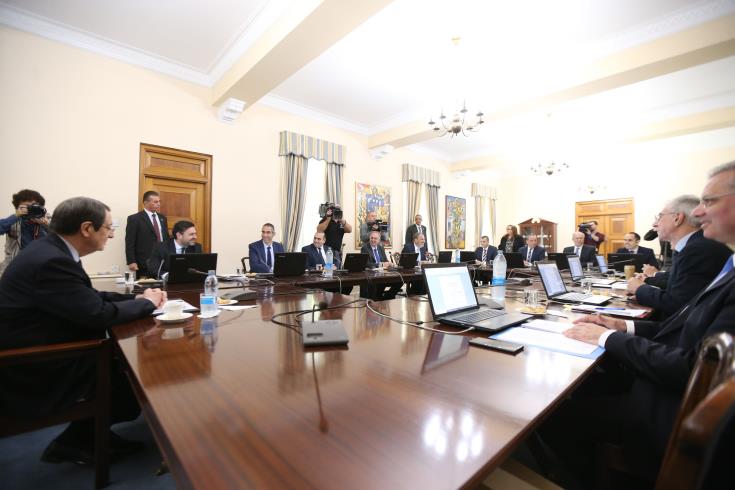 Cyprus President Nicos Anastasiades informed on Wednesday thoroughly political party leaders, during a meeting of the National Council,  about the results of his meeting in Berlin on November 25 with the UN Secretary General Antonio Guterres and Turkish Cypriot leader Mustafa Akinci, reiterating the sincere will and determination of the Greek Cypriot side for the immediate resumption of the dialogue on the Cyprus problem on the basis of the pursued settlement which is the bizonal, bicommunal federation, Deputy Spokesperson Panayiotis Sentonas said after the meeting which last approximately for one hour and ten minutes.

Moreover he noted that the Cypriot President reiterated, as he did during these meetings, “the sincere will and determination of our side for the immediate resumption of the negotiations, the dialogue, on the basis of the pursued solution which is the bizonal, bicommunal federation.”

“What we are pursuing is to ensure a durable settlement, that will be viable and functional, with a state which will be fully independent with no guarantees and foreign troops,” Sentonas noted.

Political party leaders did no make any statements after the meeting.

The UNSG had said in a statement after the meeting in Berlin that he committed to explore with the President of Cyprus Nicos Anastasiades, the Turkish Cypriot leader Mustafa Akinci and the guarantor powers the possibility to convene an informal five party meeting on Cyprus “at an appropriate stage”.

Guterres also noted that the leaders of Cyprus affirmed their commitment to the Joint Declaration of 11 February 2014, the prior convergences, and the six point framework he presented on 30 June 2017 “with a view to achieve a strategic agreement paving the way forward for a comprehensive settlement.”