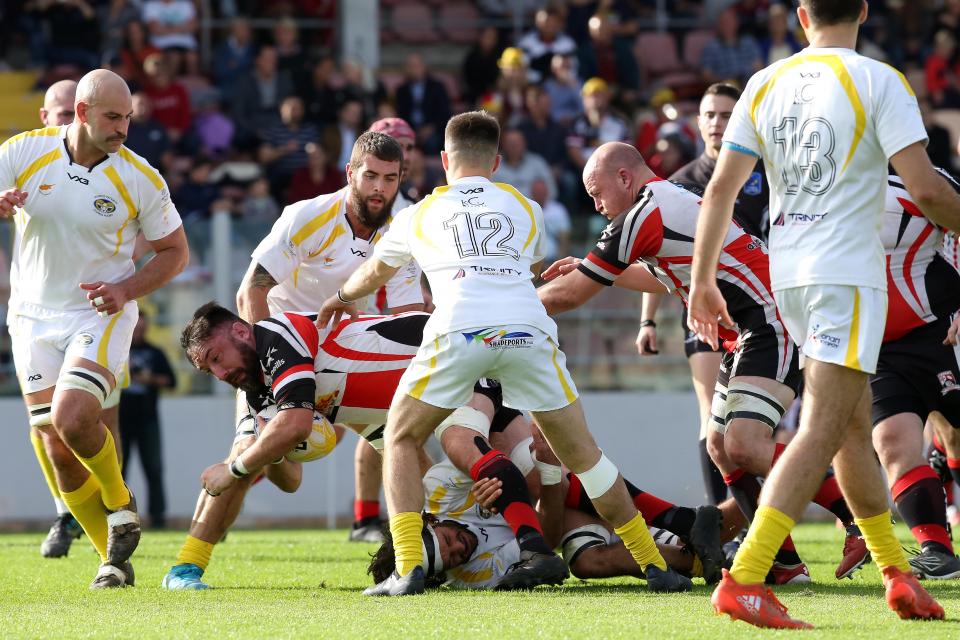 A last-gasp try from Georgios Agathokleus condemned Malta to a heart-breaking defeat to Cyprus in a Conference South One match at the Hibs Stadium in Malta.

It looked as though that Malta had done enough to rally from a 13-5 first-half deficit when two penalty conversions from Chris Dudman had given them a 16-13 lead with only ten minutes left.

However, the lively Cypriots kept fighting till the end and managed to surprise the Malta rearguard with a lightning counter attack which was brilliantly concluded by Agathokleus to hand his team their first win in the group.

Cyprus took little time to settle down as they immediately started to move the ball sideways with the Maltese forced to concede a penalty. Marcus Holden kicked the ball between the posts to put the visitors 3-0 ahead.

Malta’s response was instant as straight from kick off they barged into the Cypriot half. They managed to force a line-out two metres out and from it Harry Collins dinked his way past his marker to touch the ball home. Dudman missed the conversion to leave Malta 5-3 ahead.

The Cypriots were proving a handful in this first part of the match with the Maltese using all their experience and resilience to deny their opponents from scoring the first try of the match.

A handling mistake from Richard Gum paved the way for Cyprus to break through the Malta defence with Dom Georgiou scoring underneath the posts and Holden scoring the conversion to put Cyprus 10-5 ahead.

More woes followed for Malta as an infringement at half pitch handed a penalty to Cyprus with Holden again finding the posts to extend his team’s lead to 13-3.

The Maltese players kept their calm and Gum made amends for his earlier mistake when he whizzed his way past three players to touch home. Dudman again missed the conversion to leave Cyprus 13-10 ahead at the interval.

After the break, Malta tried to put themselves back into the game and they managed to restore parity when Dudman converted a penalty from half pitch – 13-13.

It was anyone’s game now with both sides giving everything to pick up valuable points that would put them in the driving seat.

Midway through the second half Malta won a penalty and Dudman made no mistake to give the home side a precious three-point lead – 16-13.

Dudman could have further extended Malta’s lead from another penalty but this time he missed the target to leave the match wide open.

That proved costly as the Cypriots orchestrated a swift counter attack through Georgiou who set up Georgios Agathokleus to touch home and earn his team the win.

Since their first match in 2007, Cyprus have lost only 15 matches out of Fifty. They recorded their first win over Malta on the 23rd November by 18 to 16 to celebrate their 50th International, which now gives them a 70% winning ratio.

Cyprus are not a full member of the International Rugby Board, so none of their international matches count towards the IRB World Rankings.