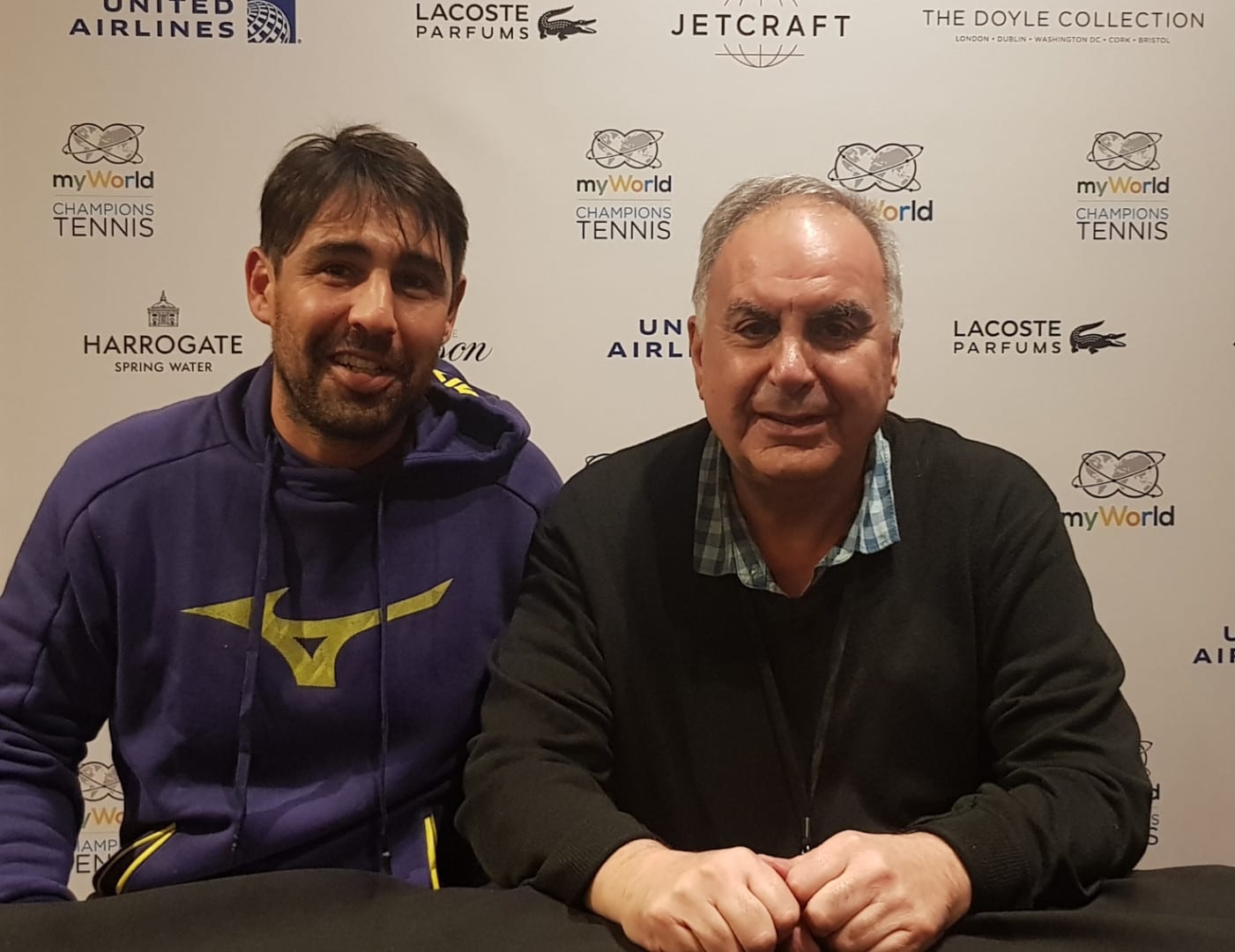 Marcos Baghdatis seen here with our Michael Yiakoumi off to a good start.

Team Greg — consisting of Marcos Baghdatis, Tommy Haas and captain Greg Rusedski — won the opening three-rubber tie against Team Tim at myWorld Champions Tennis on Thursday, which is being held at the Royal Albert Hall in London for the 23rd straight year.

Marcos Baghdatis got Team Greg off to a winning start with a 4-3, 4-2 victory over former World No. 3 David Ferrer, who is representing Team Tim. During a tie-break at 3-3 decided the first set, Baghdatis gained an early break on the third point. The Cypriot then broke Ferrer in the third game of the second set.

“It was great to get the first point for the team,” said Baghdatis. “The even more positive thing was that I came off the court without any injuries, no pains so that’s an important part. I’ve had about four months out since Wimbledon, so it’s been a long time since I played a tennis match and it’s important I get back into it. I think tomorrow the body will feel a bit sore, but I’m ready for the challenge.

“[It was] my first time at the Royal Albert Hall, which was incredible. I’m still trying to find the exact words, but it was breath-taking. I’ve been to many places around the world, stadiums in the world, but this one was really special.”

Both Baghdatis and Ferrer retired from the ATP Tour earlier this year. Baghdatis won 6-2, 7-6(4) in the last of their six FedEx ATP Head2Head meetings at Nottingham in June 2015.

In the second rubber at the iconic venue, Rusedski and Haas gave Team Greg an unassailable 2-0 lead with a 3-4, 4-1, 10-2 win over captain Tim Henman and 2003 Wimbledon finalist Mark Philippoussis. Rusedski said, “I’m so happy, I think the new format works really well. It’s actually funny to be on court with Marcos as he was with me in the Champions Tennis league in India a few years back. The doubles was really entertaining, we had some great rallies, and it’s so great to be back at the Royal Albert Hall. It’s my 12th year here in a row. I can’t quite believe that, but that’s another story! This is the event I love to play just before Christmas gets underway.”