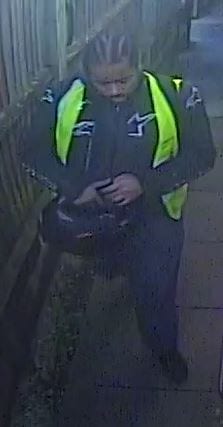 Flying Squad detectives are appealing for assistance in identifying a man who is suspected of robbing two bookmakers in north London.

The first robbery occurred on Monday, 18 November at Ladbrokes on High Street in Barnet. The suspect entered the shop at 09:40hrs and demanded cash from staff whilst brandishing a firearm.

The second robbery occurred minutes later on the same road at BetFred. The suspect entered the shop and threatened the member of staff with a firearm.

He made off on a Yahama motorcycle with a quantity of cash from both premises. He was wearing a distinctive black crash helmet with red markings on the top.

The suspect is described as a black man, aged in his 30s, and around 6ft 1ins tall.

Anyone with information as to the identity of the suspect should call the Flying Squad East on 07771 976 557 or tweet @MetCC quoting reference Cad 1889/18Nov.