A vehicle was pursued by officers from the Operation Scorpion team.
Four men were subsequently charged in connection with an incident in London.
The National Police Air Service assisted the officers as the car was pursued into Edmonton.

Four men have been charged in connection with an incident in London after Broxbourne’s Operation Scorpion officers pursued a vehicle in Waltham Cross.

At 1.38pm on Thursday 1 August the officers spotted a vehicle that was believed to have been used during an alleged robbery in Wood Green.

The officers, who are part of Operation Scorpion – the team that targets burglars, robbers and those suspected of being involved in drug and vehicle-related crime – signalled for the driver to stop in Monarchs Way.

With the assistance of the National Police Air Service, the car – a silver Mazda – was pursued onto the A10 and then into Edmonton, where the vehicle was stopped. Several people ran, but were quickly detained.

They were arrested and taken to a police station in London. The Metropolitan Police Service is continuing to investigate.

Four men have been subsequently charged with robbery and theft. They are:

Broxbourne Chief Inspector Craig Flint said: “Officers from Operation Scorpion will continue to make life difficult for anyone suspected of being involved in criminal activity.

“Relentlessly pursuing those believed to be causing harm to our communities, they aren’t deterred by policing borders and will work with partners across the board to help keep our borough and county a safe place.” 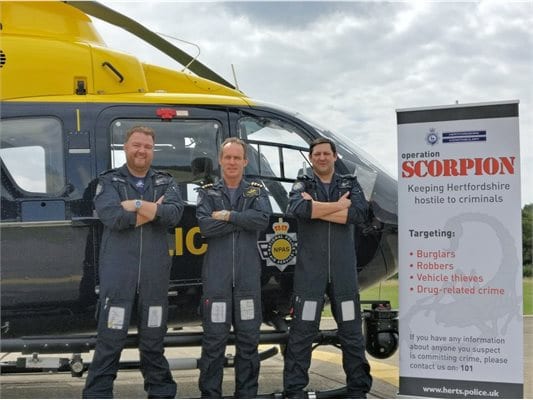