Apollon are moving towards the Europa League play-offs as they defeated Austria Vienna 2-1 in Vienna in their first leg fixture.

Apollon opened the score in the 14th minute through a Sasa Marcovic penalty with the Austrians equalising from the penalty spot as well four minutes before half-time through Florian Klein.

In the second half Apollon took took the lead when their  new signing Serge Gapke scored the winner in the 49th minute. 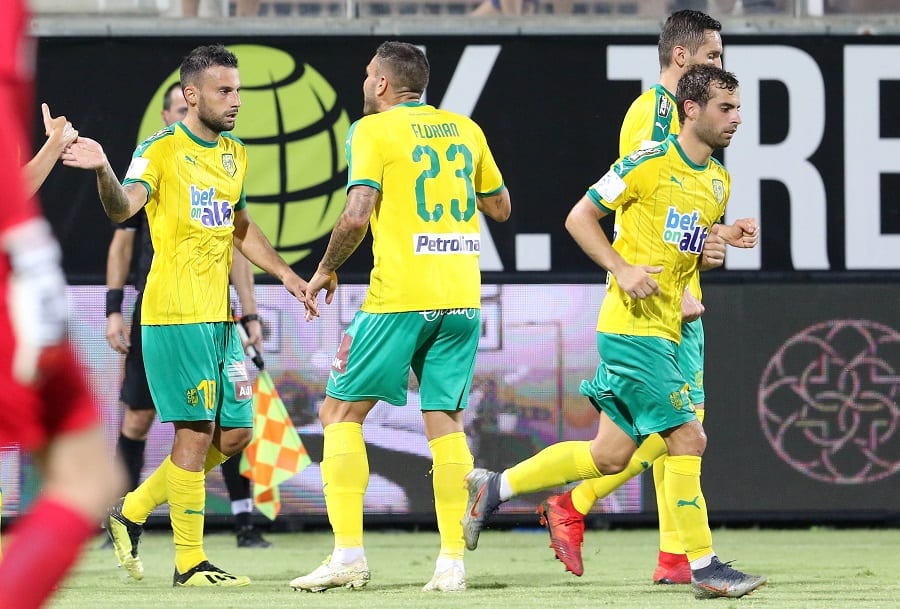 AEK drew with  Gent played 1-1 draw in their third round first leg clash furst keg match in Larnaca.Gent took the lead just before the half time break through Roman Yaremchuk and AEK equalising through Ivan Triscovski in the dying minutes .

Fans of Hellenic clubs representing the nation in the Europa League were left with contrasting feelings after Thursday night’s results.

For AEK, it was a walk in the park as they faced little opposition by Romanian side Universitarea Craiova, who they defeated 0-2.

Manager Miguel Cardoso, in his inaugural game as coach, introduced striker Marco Livaja to the game in place of Klonaridis just before the half-time break and the Croatian made all the difference between the two teams. Initially he served the ball into the area to an unmarked Mantalos, with the captain heading it home to open the score on the hour mark. Then Livaja himself put his name on the scorer board, receiving the ball by Paulinho inside the area and blasting it past a helpless Nicusor Bancu.

The result leaves the “Enosi” as clear favourites for the return game next week.

Atromitos were also successful in their bid to leave the opposition home ground with a good result, drawing level with no goals against Legia Warsaw in Poland.

The “Peristeriotes” came under a lot of pressure from the home side yet held their lines close and with Spyros Risvanis as their rock in defence kept the Warsawians away from Balasz Magyeri’s goal.

This gives them a small advantage for next week’s return game in Athens, although they will need to perform much better up front if they hope to advance to the play-offs.

Aris on the other hand, have their work cut out for them for their rematch against Molde at Kleanthis Vikelidis, after they were annihilated 3-0 by the Norwegians in the first leg of the tie.

It all seemed to be going well for Giorgos Pantelidis’ men (who was not on his team’s bench due to being penalised for his behaviour in last week’s game against AE Limassol) up until the 27th minute when the home side exchanged the ball nicely, sending it to an unmarked Eikrem who had little trouble putting it past Cuesta.

As if that wasn’t enough, four minutes later the Norwegians scored again with Hestad after a massive error in the Aris defence. The final nail in the coffin was struck by Ellingsen just three minutes before the 90.

The visitors ended the game with 10 men on the pitch after Fran Velez was sent off on the 64th minute.