A Stanford archive on the life of a legendary Greek-American Hollywood executive expanded after the discovery of new documents that were previously thought to have been lost. 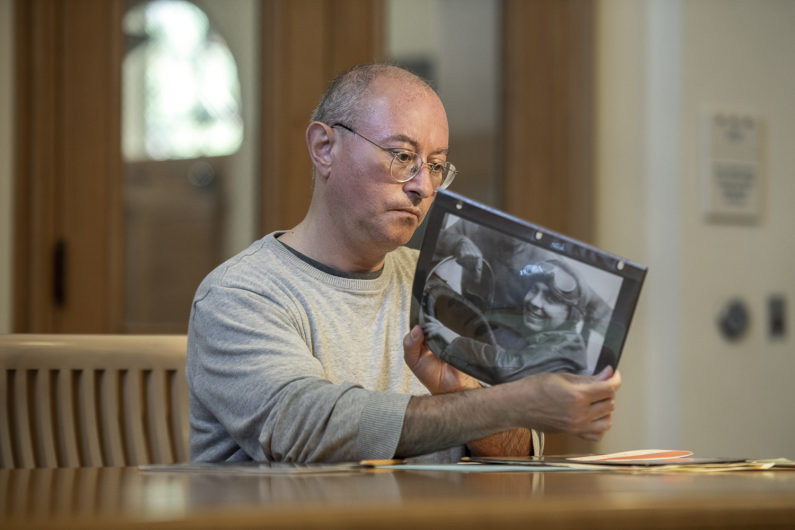 Spyros Panagiotis Skouras, who helped create 20th Century Fox and was the leader of a successful World War II foreign aid campaign, is considered one of the most influential Greek American immigrants of the 20th century.

The collection expanded in 2017 from 86 boxes after the lost part of Skouras’ archive was found by his grandsons. Stanford’s Green Library now holds 137 boxes of documents chronicling Skouras’ life and achievements.

The new archives offer unprecedented information about Skouras’ biography and his philanthropy efforts during World War II, said Stanford alumnus and Continuing Studies academic staff Ilias Chrissochoidis, who has been researching the archive since 2011.

The additional boxes contain nearly 100 hours of audio interviews with Skouras about his life, career, Hollywood and world affairs as well as hundreds of business papers about the economic performance of 20th Century Fox and about film productions, such as the 1963 film Cleopatra.

“We now have one of the most comprehensive records of a Hollywood executive in history,” said Chrissochoidis, who has published several articles and volumes about the archive, including Spyros P. Skouras Memoirs (1893-1953). “This is an invaluable research tool for multiple academic constituencies.” He also created a video.

Skouras, born in 1893 in rural Greece, immigrated to the United States in 1910. He and his two brothers operated a family-run theater chain in St. Louis until Warner Brothers bought the company and hired Skouras as the manager. His entertainment career took off from there.

During World War II, Skouras spearheaded an effort to lift the naval blockade of Greece so the country could receive supplies from the United States. His movie theater business was also instrumental in raising about $600 million for the American military during World War II.

“Skouras was one of the most successful humanitarian and patriotic immigrants,” Chrissochoidis said. “He is an example of how immigration made America great in the first place.”

Some of the most valuable new materials contain minutes of the Greek War Relief Association’s board of directors’ meetings from 1940 to 1946, when Skouras was president of the organization, Chrissochoidis said.

Stanford professor of medicine John Ioannidis, who also teaches courses on modern Greek poetry, said the new additions to the Skouras archive are important for the history of modern Greece.

“The Skouras archive is the legacy of a cosmopolitan magnate who left an indelible mark on the history of film,” said Ioannidis, who is a professor of health research and policy at the School of Medicine. “What is not well appreciated and hardly known is how his efforts were instrumental in feeding and saving millions of Greek people during the great starvation and deprivation following the Nazi occupation in World War II in Greece. A careful study of the archive may rewrite history in important ways.”

The new archives highlight Skouras’ friendships with high-profile names, including with John F. Kennedy, who, as a young man, would visit Skouras’ home when he lived in New York to watch new movie releases.

Other materials reveal how Skouras met Marilyn Monroe and how he persuaded other Hollywood executives to give her extra publicity when she was hired by 20th Century Fox.

“Skouras thought that Marilyn had great potential when no one really thought highly of her,” Chrissochoidis said.

In 1935, Skouras masterminded one of the first big film industry mergers between Twentieth Century and Fox Studios. As president of 20th Century Fox from 1942 to 1962, he green-lighted films on hitherto taboo themes, such as racism (Pinky), anti-Semitism (Gentleman’s Agreement) and mental illness (The Snake Pit), as well as the classic film adaptations of Rodgers and Hammerstein musicals.

He also oversaw the production of Cleopatra, a famous 1963 film with actress Elizabeth Taylor as Egyptian queen Cleopatra. The collection at Stanford includes two boxes with business papers on Cleopatra, including budget breakdowns and notes on Taylor’s salary and how many hours she was paid for.

The Skouras archive collection first came to Stanford in 1988 after Skouras’ granddaughter, Damaris, a Stanford alumna, had arranged the donation of the “Spyros P. Skouras Papers, 1942–1971.”

A Greek immigrant himself, Chrissochoidis discovered Skouras’ archive in late 2011 after searching for modern Greece collections at Stanford. The archive at that point was marginally known only to film historians.

Since then, Chrissochoidis’ research on the archive revealed Skouras’ impact on postwar American culture.

Chrissochoidis said he hopes that the archive will eventually be digitized. 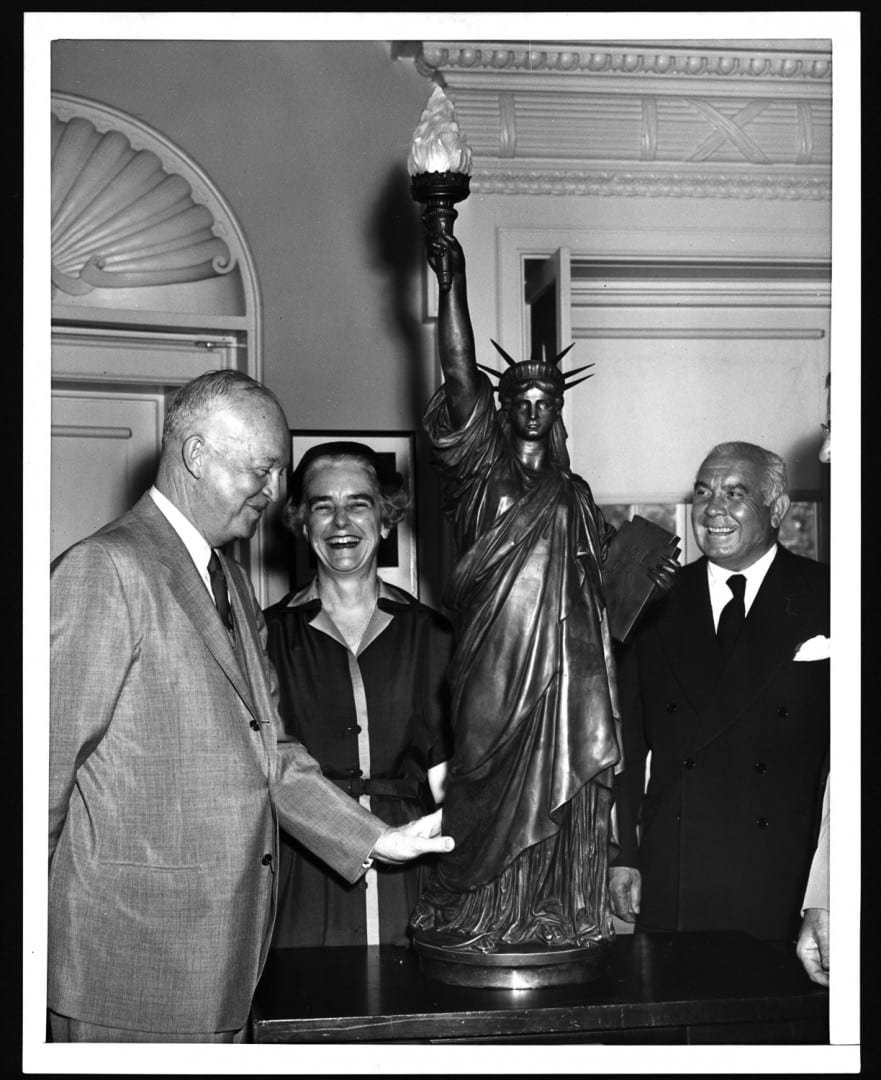 President Eisenhower inspects the original model for the Statue of Liberty during a White House announcement for the creation of the Ellis Island Museum of Immigration on August 10, 1954 with Anna Lord Strauss and Skouras.
Image credit: Courtesy Stanford Libraries Special Collections 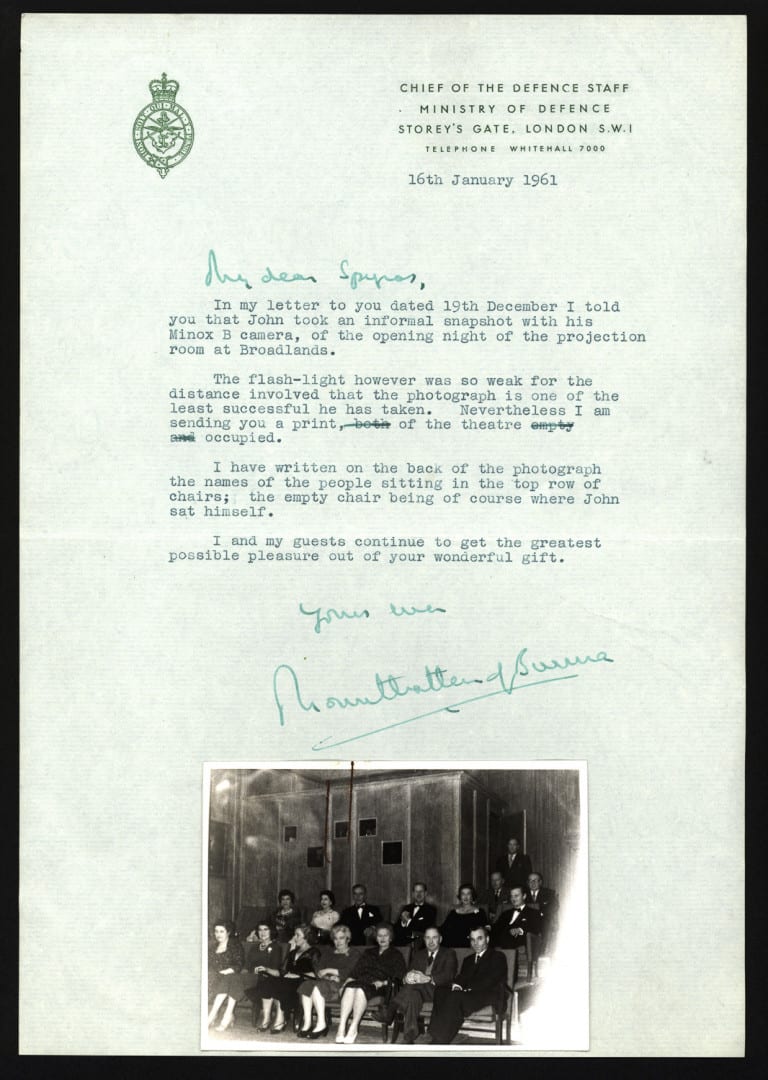 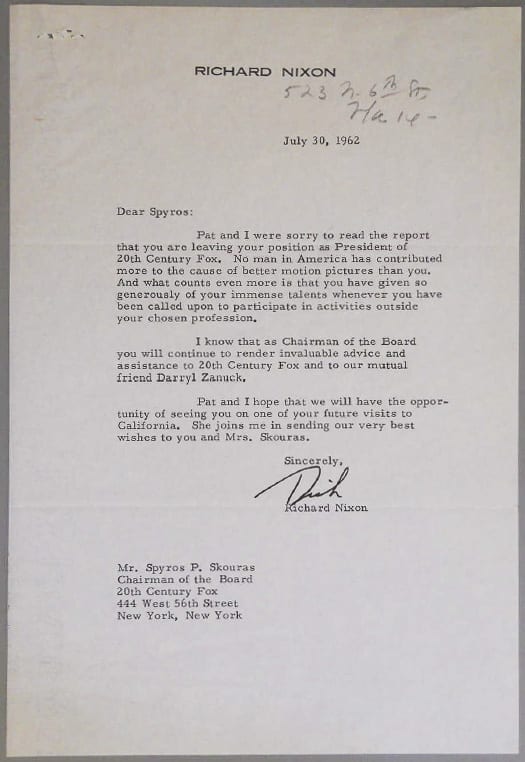 At the peak of his career, Skouras hobnobbed with the rich and famous, as this letter from Richard Nixon shows. 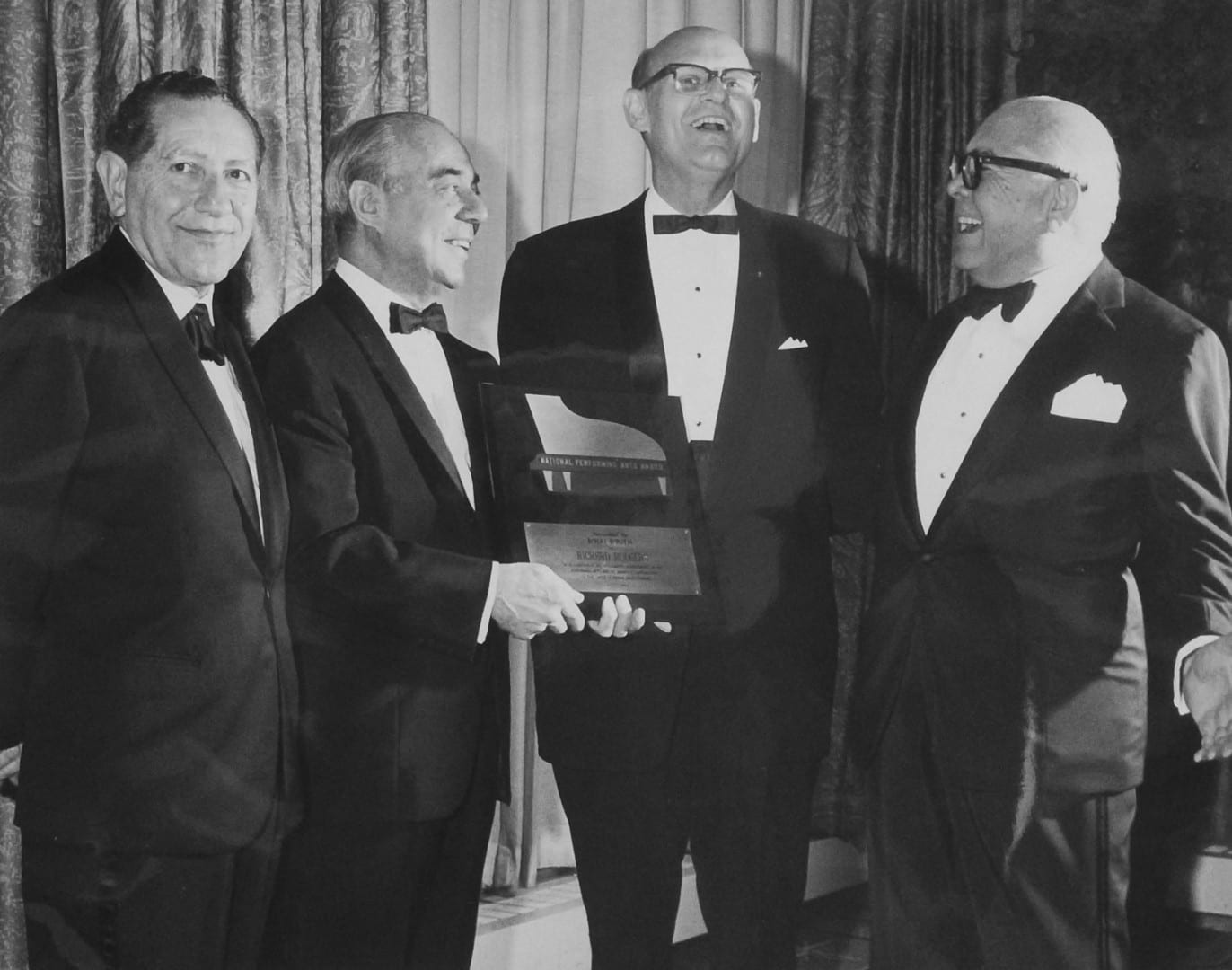 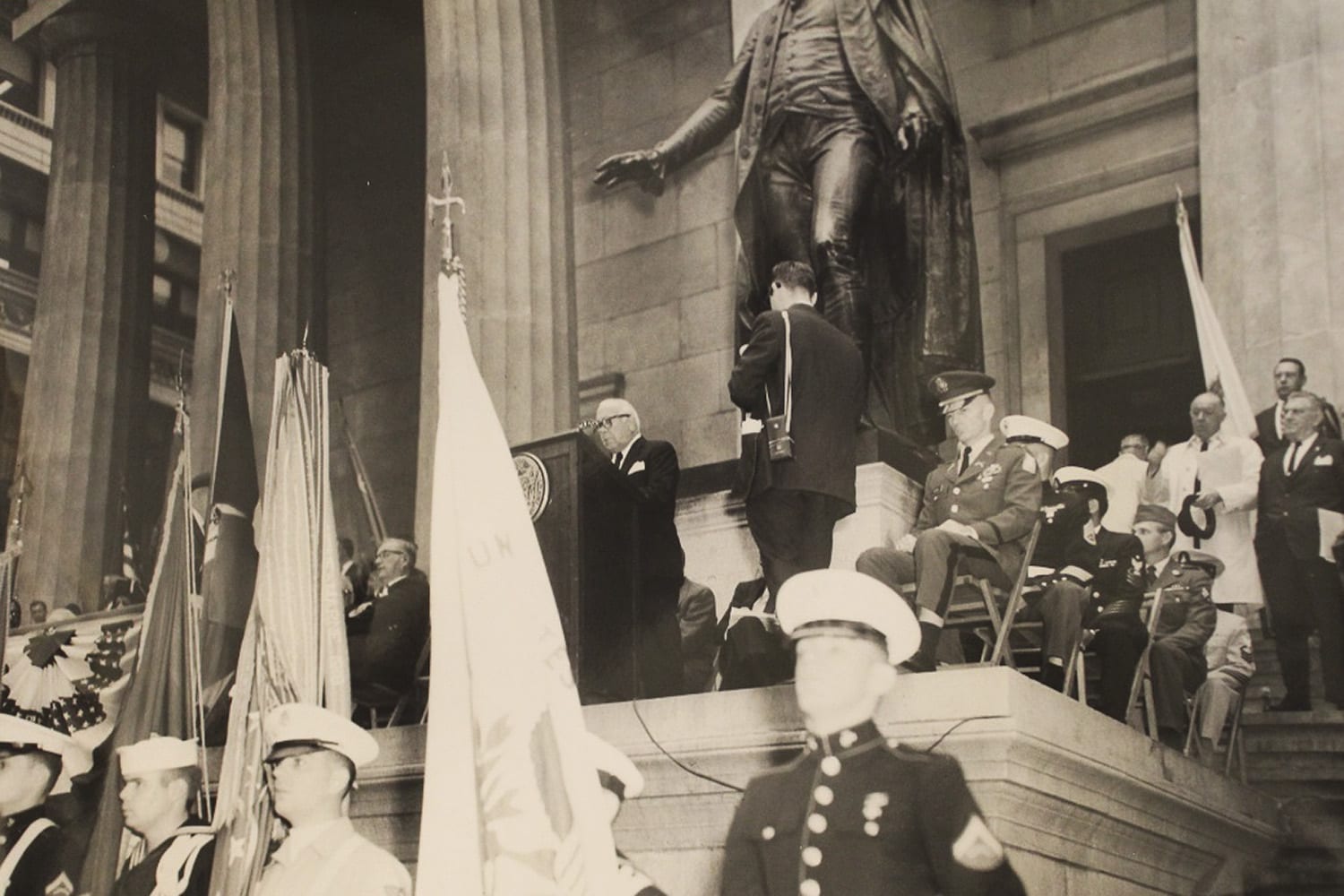 A picture of Skouras, Vice President of the American Museum of Immigration Committee, speaking on the steps of New York’s Federal Hall in support of restoring five national monuments, November 20, 1959. 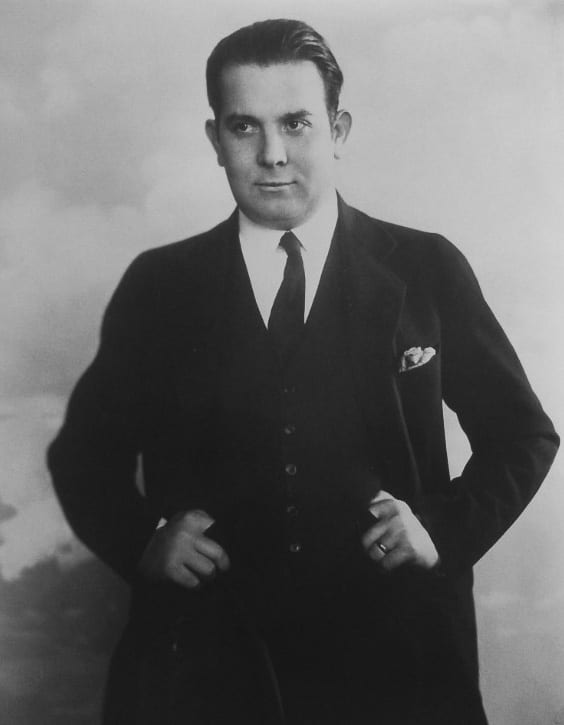 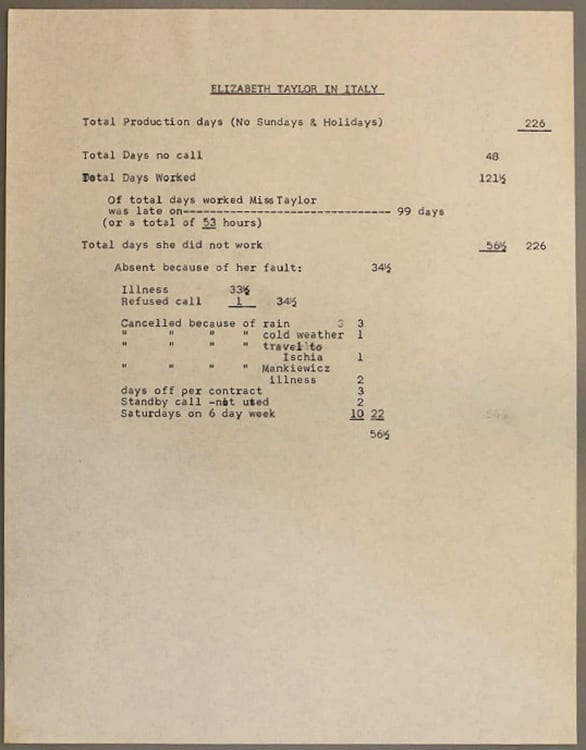 Elizabeth Taylor’s attendance record during the scandal-ridden shooting of _Cleopatra_ in Rome, 1961-1962.