Premier League Round Up

There was no sign of past traumas affecting Liverpool as they dealt with the toughest challenge of their title run-in to beat Chelsea 2-0 at Anfield on Sunday.

Five years ago it was an April defeat at home to the West London side which prompted a late season collapse as Liverpool let the Premier League title, they have craved since 1990, slither out of their hands.

A slip from Steven Gerrard and a goal from Demba Ba gave Chelsea the opening goal and became a part of footballing folklore — as the visiting Chelsea fans could not resist reminding their opponents of in song, on Sunday.

But while that annoyed the Kop, there was not the slightest hint of that recollection having any impact on the Liverpool players. 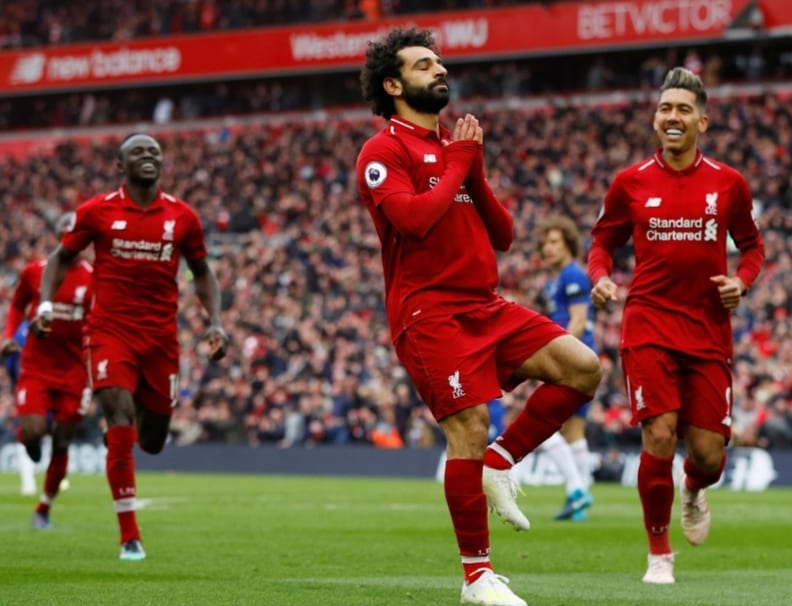 There was, for a brief moment, a hint of deja-vu when Liverpool full-back Andy Robertson slipped on the half-way line in the second-half, but the Chelsea break was snuffed out by Liverpool’s much improved defence.

“We can finally close the slipping book,” said Klopp, “Robbo slipped and nothing happened. It is not a Liverpool thing.”

This is, of course, a very different Liverpool side and one which shows no sign of letting nerves get the better of them.

“They were very disappointed back then but today was a very different game. We showed great things during the game and we are very happy with the three points.”

The only Liverpool survivor from that 2014 game was Daniel Sturridge, who on Sunday was an unused substitute, although current skipper Jordan Henderson was part of Brendan Rodgers’ squad that season.

That was a squad that followed up the Chelsea defeat by letting a three goal lead dissipate in the final 11 minutes at Crystal Palace — Manchester City winning the title by two points on the final day.

It is hard to imagine Klopp’s side disintegrating in such a fashion in their remaining games against Cardiff City, Huddersfield Town, Newcastle United and Wolves.

Liverpool, who lead by two points, must take care of their business and hope that Tottenham or Manchester United can stop rivals City from picking up maximum points from their remaining five games.

Klopp is no longer pretending that Liverpool are not paying attention to City, who won 3-1 at Palace earlier on Sunday, but is clear about what his team need to focus on.

“The first question in the meeting today was ‘what is the City score? You cannot avoid knowing about it. But it isn’t interesting to us,” he said.

“We expect them to win all their games so we just need to get as many points as possible and if we’re champions then great but if not (we are) still a really good football team.”

Liverpool beat Chelsea 2-0 at Anfield to move to 85 points with four games remaining and City are on 83 but with an extra game in hand.

The victory was the ninth straight win for City in the Premier League and manager Pep Guardiola says they will need to extend that run to 14 victories to successfully defend their title.

“We expect Liverpool to win all of their remaining games, but the Premier League is in our hands and we have to win all our games and that’s what we need to do if we want to win the title back-to-back,” he said.

Having missed an easy chance early on, Sterling put City ahead in the 15th minute when he ran on to Kevin De Bruyne’s inch-perfect pass from behind the halfway line and fired past goalkeeper Vicente Guaita.

The England international added a second for his 17th league goal of the season after the break, meeting Leroy Sane’s first-time cross into the box with a calm left-footed finish that wrong-footed Guaita as it rolled in.

Palace ensured an entertaining finish to the contest when Luka Milivojevic scored from a free kick with nine minutes to go after midfielder James McArthur was brought down on the edge of the penalty area.

City, however, sealed the deal with their third of the match as De Bruyne latched on to a poor pass from defender Aaron Wan-Bissaka before feeding substitute Gabriel Jesus who finished emphatically.

Former Liverpool forward Sterling predicted that the title race will endure until the last minute of the season.

“100 percent the way Liverpool have been playing, it will go down to the wire. I don’t see us slowing down now. Liverpool have a great squad, great self-belief, but so do we,” Sterling said.

City now face a crucial ten days starting with a home game against Tottenham Hotspur on Wednesday in their Champions League quarter-final second leg, trailing 1-0 from the opening game.

Guardiola’s side then play Spurs at the Etihad again, in the league, on Saturday before the Manchester derby at Old Trafford on April 24.

“The players have shown me they want to do it – I didn’t have any doubts about that – and we have taken three points from a very difficult place to win,” said Guardiola.

“We have played with incredible personality in the last two or three months – for the last month we’ve known that if we drop points it will be more difficult if not impossible to win the title.

“Of course, Liverpool or we could drop points when you don’t expect, and football is unpredictable in that sense,” he added.

“But we don’t have any complaints – we have taken 183 points in two seasons and still have five games left. Those are incredible numbers and show how consistent we are.”

Tottenham Hotspur’s Brazil forward Lucas Moura struck a superb hat-trick in a 4-0 win over relegated Huddersfield Town on Saturday to bolster the home side’s hopes of a top-four finish in the Premier League.

Spurs were without the injured Harry Kane and Dele Alli but Lucas’s treble after an early Victor Wanyama goal were just reward for a dominant display against the bottom side.

The win in the early game took Spurs up to third place, a point ahead of Chelsea and four points clear of fifth-placed fellow London rivals Arsenal, who have a game in hand.

Tottenham made seven changes from the side that beat Manchester City 1-0 at home in the Champions League in midweek, with an eye on the quarter-final second leg on Wednesday.

Wanyama put Spurs ahead after 24 minutes with a fine individual goal after dribbling around goalkeeper Ben Hamer and tucking the ball into an empty net from a Ben Davies pass.

Three minutes later the hosts scored again thanks to a fierce right-foot drive by Lucas that flew underneath Hamer after the excellent Moussa Sissoko set him up on the break.

Spurs’ Fernando Llorente hit the bar after halftime and Huddersfield’s Juninho Bacuna had a late free kick tipped on to the bar before Christian Eriksen hit the post on the counter.

Six minutes later Lucas controlled Eriksen’s cross and fired into the bottom corner past the helpless Hamer before rounding off the win by smashing into the top corner in stoppage time.

Chris Wood scored twice as Burnley took a major step towards Premier League safety with a 2-0 win over fellow strugglers Cardiff City on Saturday which left the Welsh club deep in relegation trouble.

Cardiff, occupying the final relegation slot in 18th place, are on 28 points, five behind 17th-placed Brighton with five games remaining. Burnley, who have won three in a row, move up to 14th place on 39 points.

Wood, who had struck the post in the second minute, put the Clarets in front in the 31st minute with a fine header from a Dwight McNeil corner.

Cardiff were furious when referee Mike Dean reversed a decision to award a penalty for handball by Ben Mee after consulting with his assistant.

Junior Hoilett then wasted a great chance for Cardiff, blasting high over the bar after being found unmarked inside the area.

Burnley made sure of the win in stoppage time when Wood added his second goal, nodding home from close range after a winding run from winger McNeil.

Elsewhere, Southampton made a big step towards securing top-flight football next season after two first-half goals from Nathan Redmond steered them towards a 3-1 Premier League home win over Wolverhampton Wanderers on Saturday.

Redmond fired Southampton ahead in the second minute when he poked the ball into the roof of the net at the near post after James Ward-Prowse released Josh Sims on the right flank and the winger delivered a sharp low cross.

Wolves piled on the pressure after falling behind and drew level in the 28th minute as central defender Willy Boly rose above his marker to head home a Joao Moutinho corner, but their joy was short-lived.

Redmond restored the home side’s lead barely two minutes later with a dinked finish after a defence-splitting pass from Danny Ings, who again carved the visitors open in the 32nd minute only for Sims to drag his shot wide.

Second-half substitute Shane Long sealed the contest in the 71st minute with an opportunist finish from three metres out, steering in a scrambled Maya Yoshida effort after the Japanese defender saw his initial overhead kick blocked.

Finally, Brighton & Hove Albion were thrashed 5-0 at home by Bournemouth and Fulham secured just a fifth Premier League win of the season as Scott Parker’s already-relegated side outplayed Everton at Craven Cottage.